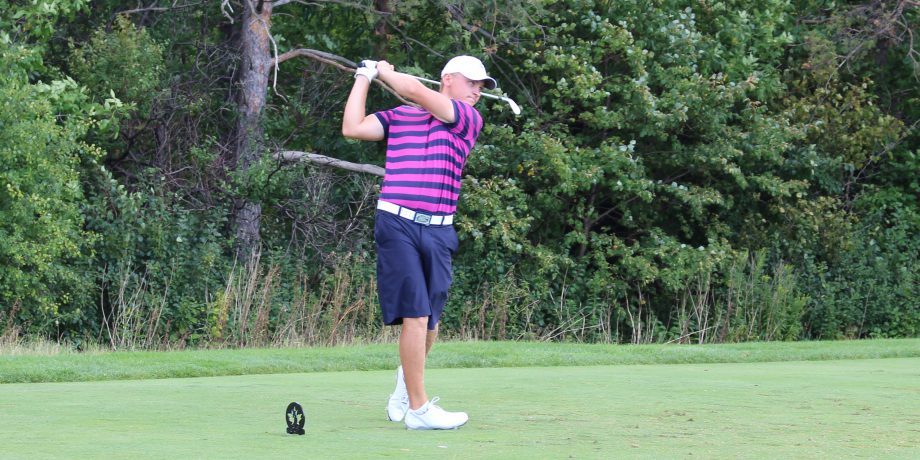 Ben Eccles and Eric Banks share the lead on the second day of competition at the 2015 Canadian Men’s Amateur Championship at Weston Golf & Country Club and The Lambton Golf & Country Club. The day began in very much the same way as the first with clear skies and fair temperatures serving as an ideal backdrop for the resumption of the first round. The picturesque conditions continued throughout the day until second-round play was suspended due to darkness.

Heavy rainfall and the ensuing unplayable conditions halted play on the first day of competition. An early morning start saw players across both host courses complete their opening rounds before the majority of competitors took advantage of strong conditions to finish their second rounds.

When play was suspended, Ben Eccles and Eric Banks had claimed shares of the lead with 7-under performances.

Banks reflected positively on his play through 36 holes. “I thought I played pretty good, but it was a little bit more windy than I expected,” said the native of Truro, N.S. “We played some holes into the wind and I hit some pretty poor chip shots coming in, which is usually one of my strengths, so I will work on that.

“But overall, 3-under is a pretty solid day. I shot 4-under at Lambton yesterday, so I knew I was in a good position to come out today and if I had a good round, maybe be around the top of the leaderboard.

“Despite being deadlocked with Eccles, a product of Victoria, Australia, Banks maintains the need to remain focused on the task at hand. “I’m hitting my driver really good right now. I need to keep doing that and just stay calm. When I made a few bogeys coming in, I was getting a little too hot. So I just need to relax and just keep doing what I’m doing.”

Banks, a graduate of the University of Florida, began the day with four birdies after starting the round on the back nine. Eccles countered with a six-birdie performance, highlighted by a 34 across the front nine. Billy Kennerly was not able to complete his second round, but the product of Alpharetta, Ga., currently holds third-place following a bogey-free 3-under performance through 13 holes.

Garrett Rank of Elmira, Ont., continues to play through a busy summer which has included representing Team Canada at the Toronto 2015 Pan Am Games, as well as, a victory at the 2015 Ontario Men’s Mid-Amateur Championship. The reigning Canadian Mid-Amateur champion sits fifth at even-par through 13 holes before play was halted.

Following the first 36 holes of play, the Willingdon Cup will be awarded to one of the 12 provincial and territorial three-person teams in the tournament.

The projected cut is currently sitting at 4-over par. The second round is scheduled to resume at 7:30 a.m. EDT at both courses. The third round is set to begin at 10:30 a.m. at Weston Golf & Country Club.