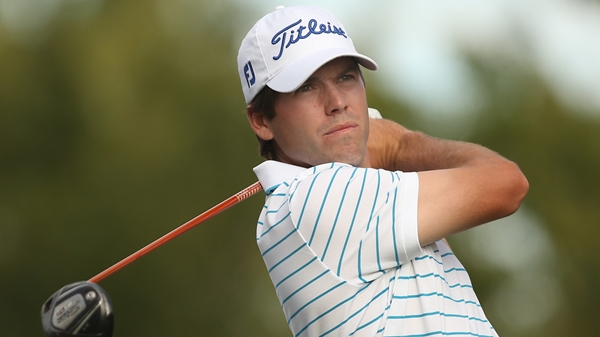 LAS VEGAS – Ben Martin birdied five straight holes on the back nine Saturday and finished with a 9-under 62 to take a two-stroke lead in the Shriners Hospitals for Children Open.

Winless in 55 career starts on the PGA Tour, the 27-year-old former Clemson player matched his best score on the tour – set last year in the Zurich Classic – to get to 17-under 196 at TPC Summerlin.

He has the 54-hole lead for the first time on the PGA Tour.

“Just go out tomorrow with the same mindset, head down, and try to keep making birdies,” Martin said.

Martin had four birdies and bogey on the front nine, birdied No. 10 and took the lead with his birdie run on Nos. 13-17.

“I felt it from the first hole (when) I made a 20-footer for birdie,” Martin said. “So I felt confident with my putter and I was getting a lot of looks. I’ve played that stretch of holes well all week, 15 and 16, and that’s really the part of the course that most guys are making their birdies.”

Scotland’s Russell Knox, tied for the second-round lead with Andrew Putnam, was second after a 66.

“Bogey-free on a Saturday is exactly what I wanted,” Knox said. “I knew I was going to make birdies and I’m seeing the lines on the greens really well. I knew if I just limited my mistakes, I was going to be right up there.”

Jimmy Walker also had a 62 to move into a tie for third with Andrew Svoboda at 13 under. Walker won three times last season and played in the Ryder Cup.

“Well, I think I hit a lot of greens and I had a lot of really good looks,” Walker said. “I remember there was a lot of putts that didn’t go in, too, but I hit a lot of close shots and I made some really good putts. It was fun. Hit it good and putted good.”

Piercy, a former RBC Canadian Open champion, is playing on a major medical extension this season. He had surgery on his right arm in February.

Putnam shot a 73 to drop into a tie for 24th at 8 under. He had six bogeys, four in a six-hole stretch on the back nine.

The other two Canadians in the field this week are Adam Hadwin and Nick Taylor.

Jarrod Lyle was tied for 42nd at 6 under after a 70. The Australian is making his second PGA Tour start since a recurrence of leukemia some 18 months ago.