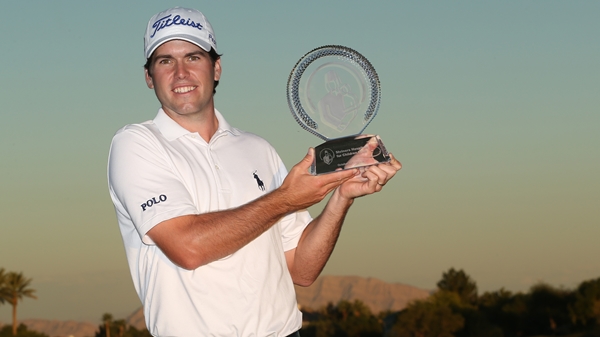 LAS VEGAS – Ben Martin made a 45-foot eagle putt to regain the lead and finished with a 20-foot birdie putt for a 3-under 68 and his first PGA Tour victory Sunday in the Shriners Hospital for Children Open.

Martin played his final four holes at the TPC Summerlin in 4-under par, though no shot was more important than the eagle.

Kevin Streelman ran off five birdies in a six-hole stretch to overtake Martin for the lead, and Streelman hit a wedge into 5 feet on the 18th hole. Martin, who led by as many as four shots on the back nine, hit a 6-iron over the water to the back of the green on the par-5 16th.

His eagle putt broke back to the left over the final few feet and dropped in the cup to put Martin back in the lead.

Martin two-putted for par on the 17th, and then rolled in a birdie putt he didn’t need for a two-shot victory. The 27-year-old from South Carolina won in his 56th career start.

“It was an awesome way to finish,” Martin said. “I didn’t feel like I had much going all day. Four under on my last four to cap my first win was just awesome.”

Martin finished at 20-under 264 and returns to the Masters, this time as a pro. He played Augusta National in 2010 as the U.S. Amateur runner-up.

Streelman set a PGA Tour record in June when he closed with seven straight birdies to win the Travelers Championship. He was headed down that path again with a string of birdies until he missed his last putt on the low side of the hole. He closed with a 65.

“I tried not to look at the leaderboard,” Streelman said. “It was kind of like Travelers. I had to make as many (birdies) as possible as quickly as possible.”

Russell Knox, who played in the final group with Martin, took a double bogey on No. 9 to fall back. He made three straight birdies late in the round, and then made a tough par putt on the 18th for a 70 to finish alone in third.

Martin had a four-shot lead after 10 holes when he pulled his tee shot behind a tree and dropped a shot at the 11th, and Streelman began his run of his birdies. Martin finally answered with a drive that hopped onto the green at the par-4 15th that set up a two-putt birdie, and then he made good on his second straight eagle attempt.

It was a quick turnaround for Martin, who opened the PGA Tour season last week at the Frys.com Open with rounds of 78-79 to miss the cut. He took the lead in Las Vegas with a 62 in the third round to take a two-shot lead into the final round.

Martin said he tried not to look at leaderboards even though “my heart was beating out of my chest.”

“I tried to keep plugging along and let it happen,” he said.

Streelman didn’t look at leaderboards either, although he couldn’t ignore the one behind the 18th green. He heard the cheers from the 16th green as he was lining up his birdie putt on the 18th, not realizing at the time it was Martin making eagle.

Canadians David Hearn and Adam Hadwin both cracked the top 10.

The other Canadian in the field was Nick Taylor. He tied for 56th at 5-under 279.

Both Hearn and Hadwin were pleased with their performances and took to Twitter following the final round with their comments.

Felt good this week! Excited to get off to a good start….now the glamorous part…a redeye home. Hold on @heathyhearn! #ShrinersOpen

I guess sunday is moving day out here! Bogey-free, low round by 2 and done in front of a bunch of family and friends. Couldnt ask for more.