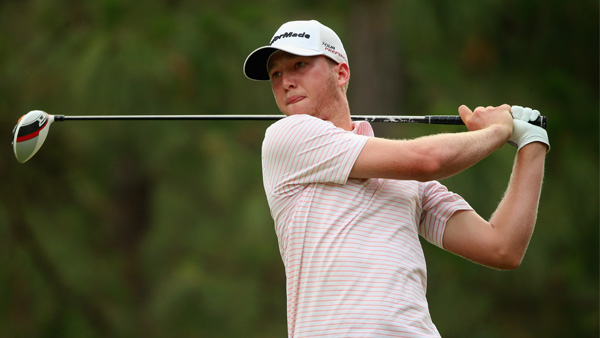 PLAYA DEL CARMEN, Mexico — Daniel Berger had five birdies in a seven-hole stretch Thursday for a share of the lead in the OHL Classic.

“This is what we work so hard for, so it’s great to get off to a good start, but got to keep it going,” said Berger, the 21-year-old Florida State player who earned a PGA Tour card last season on the Web.com Tour.

The six-player tie is the largest after 18 holes since six players also topped the leaderboard in the 2013 St. Jude Classic.

The Greg Norman-designed course requires accuracy off the tee.

“I think I hit maybe two drivers all day,” Berger said. “It’s just kind of one of those courses where you’ve got to hit the fairway. Super tight off the tee, so just put it in play and you’ve got some birdie opportunities.”

The long-hitting Finau hit driver only once.

Fifty-year-old Davis Love III was at 66 in a group that included Aaron Baddeley, Charley Hoffman and Pat Perez.

“I made some putts when I had to,” Love said. “I had four birdies in five holes in a little spurt in the middle of the round, and put the ball in play. I think that’s what you have to do here. You have to keep it in the fairway and you have to putt well.”

Defending champion Harris English closed with a three-putt bogey for a 67.

“It hurt on the last hole, three-putting, but I’m still going to take a lot of positives out of today,” English said.

Carlos Ortiz topped the seven Mexican players in the field at 67. He won three times on the Web.com Tour last season.

“I started a little bit nervous with all the people who were watching, family, friends,” Ortiz aid. “But I had a very good beginning on the first hole with a birdie and then I birdied 3, 4, 5. It helped me a lot to get relaxed.”

Canada’s Nick Taylor, the Sanderson Farms Championship winner Sunday in Mississippi, had a 71.

The tournament is the final regular-season event of the year.