Berger shoots 62 to take lead after 3 rounds at Travellers 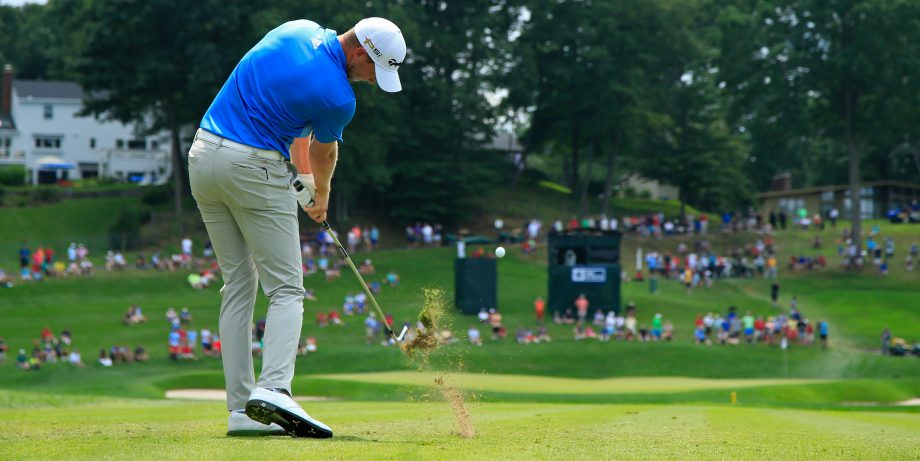 CROMWELL, Conn. – Daniel Berger, last season’s rookie of the year on the PGA Tour, missed three cuts in January and February and began hearing the whispers.

“Everyone was starting to say sophomore slump and that kind of got me upset a little bit,” he said. “Not upset, but kind of like, ‘Come on, let’s get going here.”’

Berger earned his first PGA Tour win two months ago in Memphis, and will be going for a second on Sunday. He shot an 8-under par 62 on Saturday to take a three-stroke lead into the final round of the Travelers Championship.

The 23-year-old Floridian made nine birdies, including seven on his final 10 holes, to finish at 15-under 195 after 54 holes.

Berger, who is still recovering from a left shoulder injury that forced him to miss several tournaments including the British Open, had just one bogey and was two strokes off the course record, following up rounds of 66 and 67 that had him tied for the lead coming into the day.

Russell Knox shot a 64 and Russell Henley and Tyrone Van Aswegen each shot 65 to tie for second place at 12-under par. Patrick Rodgers shot a 66 and was five strokes off the pace.

Berger, who is coming off a shoulder injury, is looking for his fifth top-10 finish since April, a string highlighted by his win at the St. Jude Classic.

Berger said he first tweaked his left shoulder in Memphis, then strained it at the U.S. Open. The injury forced him to withdraw after hitting his opening tee shot at the WGC-Bridgestone Invitational and he didn’t return until last week at the PGA Championship.

He said it expects the shoulder to be sore tonight, but it has not been bothering him on the golf course.

“It feels great this week and if I do the right thing then hopefully it’s gone forever.”

Berger said besides the win, he’s hoping for very personal reasons to secure a spot on the Ryder Cup team this summer. His father, Jay Berger, played tennis for the U.S. Davis Cup team.

“I think it would be pretty cool to have a father and son play Davis Cut and Ryder Cup,” he said.

The golfers went out early in trios Saturday off the first and 10th tees to avoid thunderstorms predicted for the area.

Knox set the pace, opening his round with three consecutive birdies. He putted the ball just seven times over his first six holes.

He also is looking for his second PGA Tour win, after a victory last November at the World Championships in Shanghai.

Berger is not the only player coming off an injury.

Brooks Koepka, playing with a brace on his right ankle, shot a 30 on his back nine to finish with a 64 and go 9-under par for the tournament, tied for sixth place with Paul Casey.

Koepka tore a ligament earlier this summer and, like Berger, missed he British Open. He said he decided to play the tournament rather than rest because, like Berger, he wants to get enough points to play in the Ryder Cup.

Koepka spent the day sparring with playing partner Daniel Summerhays, who also had four birdies on the back nine, before hitting a tree on his drive at the par-4 18th. He ended up saving a bogey with a 44-foot uphill putt and goes into Sunday at 8-under par, tied for eighth place.

“To see that go in, that was definitely a sigh of relief,” he said. “A good putt can forgive a lot of weaknesses and sins that you’ve committed in one hole.”

U.S. Olympians Bubba Watson and Patrick Reed each shot 68 and are 5-under par, 10 strokes back. Fellow Olympian Matt Kuchar shot a 71 and is at 3-under par.

Watson has insisted his focus this week is on Connecticut, but acknowledged that he wore his opening ceremony outfit on Friday night, texting a photo to teammate Rickie Fowler, who took parade in the parade of athletes.

“He texted me back his outfit,” Watson said. “I said I was there in spirit, so I had to wear my outfit, too.”