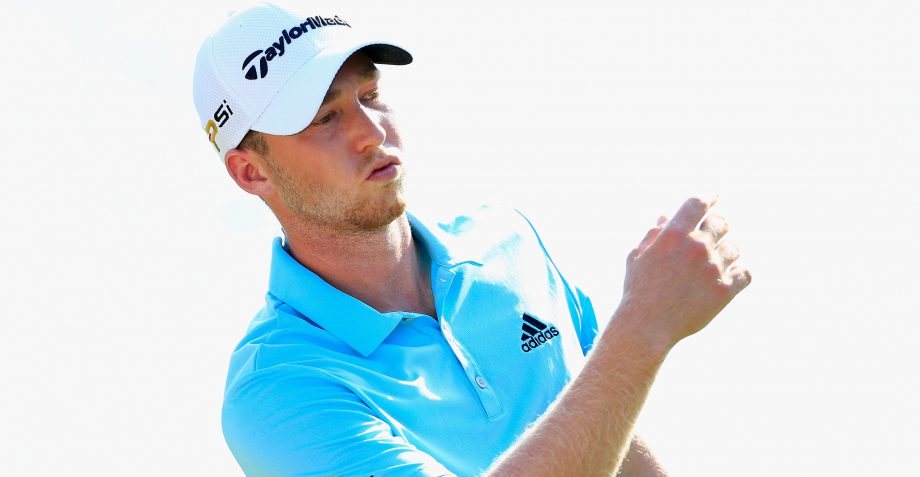 CROMWELL, Conn. – Daniel Berger says he’s healthy again and hoping to regain the form that helped him to his first PGA Tour title two months ago.

Last year’s rookie of the year followed his first-round 66 with a 67 on Friday for a share of the lead in the Travelers Championship.

Berger strained his shoulder at the U.S. Open after winning in Memphis at the St. Jude Classic, his fourth top-10 finish in seven starts. The injury forced him to withdraw after hitting his opening tee shot at the WGC-Bridgestone Invitational and he didn’t return until last week at the PGA Championship.

“I definitely played better than I thought I would,” he said. “This is my seventh round in six weeks and for a professional golfer that’s not a lot.”

Four players, including 49-year-old University of Hartford graduate Jerry Kelly, were a shot behind. Kelly had a 70 after sharing the first-round lead with a 64.

Nick Taylor, of Abbotsford, B.C., was the lone Canadian to make the cut, shooting a 71 to sit well back in a tie for 56th at 1 under. Fellow Abbotsford native Adam Hadwin and Derek Gillespie, of Oshawa, Ont., missed the cut.

Blayne Barber had the best round of the day with a 64 of his own to top the seven players two strokes back.

“The wind got up a little bit today, so you had to be playing good golf to shoot a really good number,” Leishman said.

U.S. Olympians Bubba Watson, Patrick Reed and Matt Kuchar remained in contention. Kuchar shot a 67 to move to reach 4 under. Reed, who turned 26 on Friday, also shot a 67 and was tied with Watson at 3 under. Watson, the defending champion, had a 70.

Seventy-three players made the cut by shooting even par or better.

Henley, who is playing this tournament for the first time, joined the leaders by sinking a 20-foot birdie on his final hole, the par-4 ninth.

“It was just a little bit tricky,” he said. “I think with no wind on this course we would have seen double digits (under par) by now.”

Van Aswegen put up an early 66 and led most of the day as the wind picked up and the greens dried out.

The 34-year-old, who is looking for his first PGA Tour win, followed up on his 67 Thursday with a second straight bogey-free round. His four birdies included a 45-foot putt on the par-4 10th.

“You make a birdie on 10, you’re gaining a stroke on the field there,” he said. “I’m hitting the ball quite well and putting really well.”

Kelly had five birdies and five bogeys. He won the last of his titles in 2009.

“I’m tired,” he said. “I’m going to watch a movie and see if I can rest a little bit and see if the old bones will work for two more days.”

Reed, one of six Olympians playing in the tournament, turned 26 on Friday. He was presented with a cupcake on the first tee, and blew out the birthday candle on top with a practice swing. Watson then led the crowd at several holes in rousing renditions of “Happy Birthday.”

“Half the people were chanting ‘Happy Birthday’ and the other half chanting for all of us, ‘USA,’ so it was cool,” he said.

Andrew Loupe, among the leaders after the first round, held a brief one-stroke lead Friday before on his fourth hole of the day, the par-4 14th. He hit his drive out of bounds left, overcompensated right on his next drive and finished with a seven on the hole and missed the cut after shooting a 76.

The most unusual play of the day came from Vaughn Taylor, who put his tee shot on the par-4 17th hole in the course’s signature lake. After conferring with a rules official, he was allowed to take a drop from the opposite shore near the 16th tee, because it was no closer to the hole. That gave him a better angle at the green. After a long cart ride around the lake, he was able to make bogey, despite clipping a corporate tent with his approach shot.

Matt Jones shot a second consecutive 69, despite suffering from what officials described as nausea and dehydration during his round. He took a 15 minute break at the turn and received three Intravenous bags of fluid.

After two days of sun and temperatures in the mid-80s, the forecast for Saturday afternoon include the possibility of severe thunderstorms. Because of that, tournament officials will have the players going out early in threesomes off both the first and 10th tees.