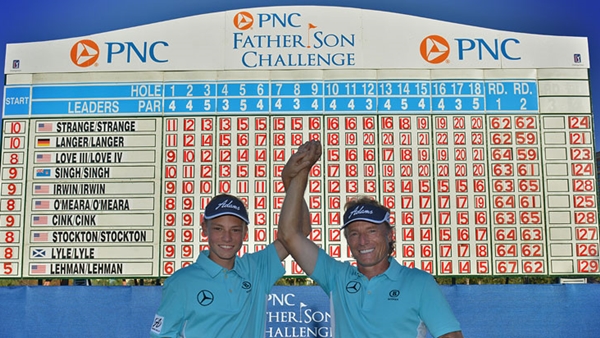 ORLANDO, Fla. – Bernhard and Jason Langer won the PNC Father-Son Challenge on Sunday, closing with a 13-under 59 for a two-stroke victory in the better-ball event.

The Langers finished at 23-under 123 at The Ritz-Carlton Golf Club’s Grande Lake Orlando.

Fourteen-year-old Jason jumped into the lineup Saturday when sister Christina withdrew because of back issues. He’s the youngest son to win the event, breaking the mark of 15 set by brother Stefan in 2005.

“It was an unbelievable, magical week, just like the whole year,” Bernhard Langer said. “Jason, I’ve been watching him play golf for several years now and he has played better the last two days than he has ever played in his whole life, under this kind of pressure. It’s unbelievable. … I am so proud of him.”

The Langers had six birdies and an eagle on the first seven holes. They added five more birdies on the back nine, the last on No. 18.

“Just to be out here, I was hoping for maybe a top 10, even a top five if I played really well, but nothing near like this,” Jason Langer said. “I was satisfied with the way I played. I made a few putts today and, as expected, he played really well. Yesterday, we were burning a lot of edges. We missed a few short ones we wish we’d have gotten back. Today, it was really good. I left them out there the first three holes, but he made up for it and he drained them. Those first three were so key today.”

“I think we both tried a little too hard. We get a little impatient,” Davis Love III said. “When you make a couple pars in a row, like any tournament, you feel like you’re getting behind. We did better today, obviously, than we did yesterday, but we stalled on 7, 8 and 9 both days. We both hit it well enough to win today, but the short game was just a little off.”

Curtis and Tom Strange tied for third with Vijay and Qass Singh at 20 under. The Stranges shot 62, and the Singhs had a 61.

“We had a lot of (birdie) opportunities, for sure,” Jack Nicklaus said. “We didn’t make much all week. When you are finishing where we did, you don’t make many putts. You make a lot of putts, you finish up. Any time I play, I want to be competitive and we just weren’t very competitive. I particularly, Jackie didn’t play too bad. Jackie played reasonable well.”