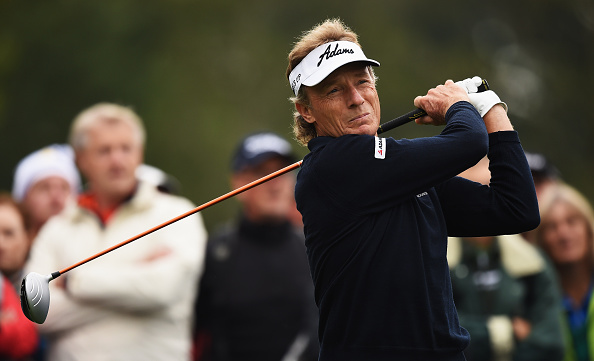 CARY, N.C. – Bernhard Langer shot a 7-under 65 in windy conditions Friday to take a two-stroke lead in the Champions Tour’s SAS Championship.

The 58-year-old German star had seven birdies in a bogey-free round at Prestonwood Country Club. He won the Senior Players Championship in June for his 24th victory on the 50-and-over tour.

“It was great not to make any bogeys because there’s lots of opportunities to make bogeys,” said Langer, the 2012 winner at Prestonwood. “I got off to a nice start with two birdies right away. I played some solid golf, hit a lot of fairways, hit a lot of greens and gave myself some opportunities.

“I never really struggled for par. It was stressless golf in a sense where I just kept the ball in play and took my chances and made the odd putt here and there.”

“It’s one of the windier days I’ve played out here, so it was a challenge right out of the box,” Waldorf said.

Langer is third in the Charles Schwab Cup points race, 388 points behind leader Colin Montgomerie and Jeff Maggert with four events left. Montgomerie was tied for 17th after a 70, and Maggert was tied for 36th after a 72. The tournament winner will get 315 points. Langer is trying to become the first three-time Cup winner after taking the season titles in 2010 and 2014.

Langer skipped the last Champions Tour event in September at Pebble Beach to play in the European’s European Open at a course he designed in Germany.

“The goal is to draw closer to the two guys or maybe even pass them, but that’s a big challenge,” Langer said about Montgomerie and Maggert. “They’re both very good golfers. They’ve had fantastic years. So, it’s not going to be easy, but today was a good start.”

Maggert has a tour-high four victories this year, winning major titles in the Regions Tradition and U.S. Senior Open. Montgomerie successfully defended his title in the Senior PGA Championship.