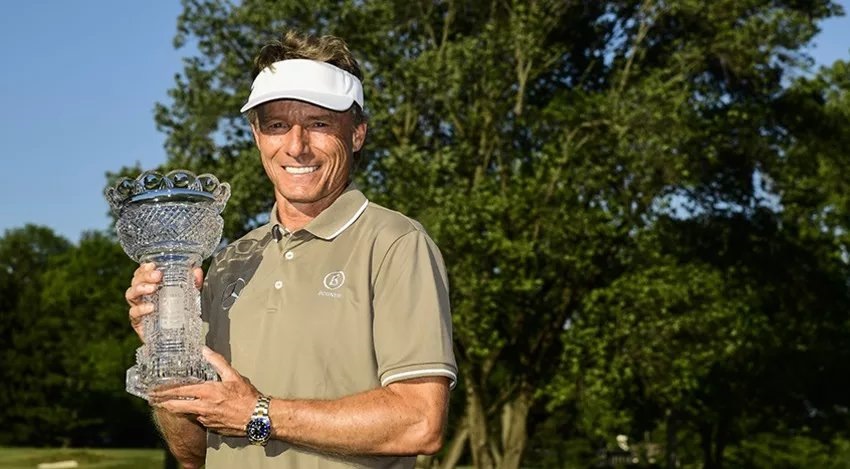 The 58-year-old German star won his seventh senior major title – his fifth in the last 11 majors – to tie Hale Irwin for second place on the career list, a victory behind Jack Nicklaus.

“It was a tough, tough day,” Langer said. “The wind was so gusty and so strong at times, I was wondering if they were going to call the tournament today. The ball was oscillating a lot and there were a few putts, if you hit them at the wrong time, the ball would have just continued to go.”

Three strokes ahead at 2 under entering the round on the difficult Wissahickon Course, Langer closed with a 3-over 73 to finish at 1-over 281 – the highest winning score in the history of the event first played in 1983. Mark O’Meara had the previous record at 7 under in 2010 at TPC Potomac in Maryland.

In contention this year at the Masters, Langer held off Miguel Angel Jimenez and Joe Durant, saving bogey with a 6-footer on the par-4 17th and getting his birdie putt to drop on the par-4 18th after it caught the edge and circled the cup.

“I didn’t make anything until I made about a 6-footer on 17 and a 12-footer on 18, that was about it,” Langer said. “Made nothing all day and had many opportunities. Now, you know, whether that was me or the wind or the greens, who knows, but it was difficult and I don’t think there were many good scores.”

Langer parred 10 of the first 11 holes on the A.W. Tillinghast-designed layout, making a bogey on the par-3 third. He also bogeyed the par-4 12th and was fortunate to escape with the bogey on 17.

“My patience was good, it really was good all day,” Langer said. “I was fortunate that I was never really caught. I think I was always in the lead all day, even though it dwindled to one or two at a time, but I was always in the lead. So even though I made some bogeys here and there, I still kept my nose in front. … I just couldn’t make the putts.”

Langer became the oldest winner in the history of the tournament and earned a spot next year spot in The Players Championship. He won in 2014 at Fox Chapel in Pittsburgh and last year at Belmont in Massachusetts.

“It feels great to have achieved the hat trick in this tournament the last three years,” Langer said. “It’s amazing, I still have to pinch myself to realize what happened.

Langer has three victories this year, also winning the Chubb Classic in Florida in February and the major Regions Tradition last month in Alabama.

“When you keep winning, confidence breeds success and success breeds confidence,” Langer said. “When you’re constantly up there, it’s like when Tiger (Woods) was up there almost every time he teed it up, he’s used to that. You get used to the pressure, you get used to being in the hunt and you get used to winning.”

The two-time Masters champion is third on the tour victory list with 28, one behind Lee Trevino. Irwin is the leader with 45.

Jimenez and Durant each shot 68 for the low rounds of the day.

It’s tough from the very beginning all day long,“ Jimenez said. ”Par is good in this condition, it’s very good. … The golf course is a magnificent golf course. Beautiful. People say it’s always nice and we play with a lot of wind here, but the condition of the course is perfect and it’s a great track.“

“What a beautiful golf course,” Durant said. “We’re having a ball playing here, it’s just very hard. The wind hasn’t been down at all the entire week and it’s just been tough, and when it dries out it makes it that much tougher.”

Brandt Jobe was fourth at 3 over after a 71.

“It was swirling so hard,” Jobe said. “I mean, from 105 yards we played a 150-yard shot, so how do you gauge that? But the golf course is playable. We had to have gusts over 40 today. It was brutal, but I think today was the toughest day because it was hard to putt.”