The best British Open debut is name on Claret Jug 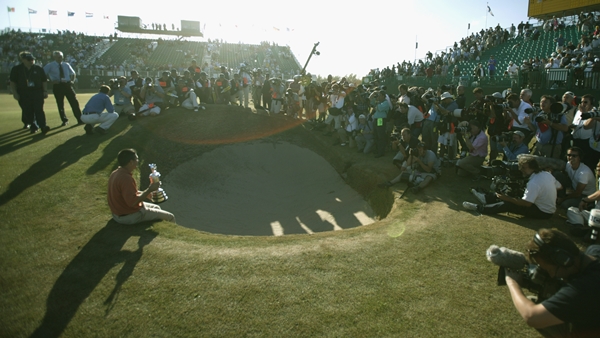 HOYLAKE, England – Brendan Steele played in the final group at a major three years ago. Brendon de Jonge played in the Presidents Cup last year. They will be among 36 players making their debuts Thursday in golf’s oldest championship.

Is it too much to ask for them to go home with the claret jug?

Royal Liverpool is the least known of the links courses on the rotation – this is only its second time to host the Open since 1967 – though all links golf can be a mystery. Winning for the first time is not as unusual as it would be at Augusta National, where a first-timer has not won since 1979.

Even so, examples are rare.

Willie Park Sr. was the first to win on his debut, but only because 1860 was the first championship. Ben Curtis was the most recent in 2003 at Royal St. George’s. Among the candidates might be Patrick Reed, who at No. 30 is the highest-ranked player in the British Open for the first time.

Here are the five best debuts in Open history:

Sam Snead was one of only three Americans who journeyed across the Atlantic in 1946 when the British Open was staged for the first time after World War II. Back then, Americans lost money playing the Open because first place paid only 150 pounds.

It’s safe to say the Slammer wasn’t terribly impressed when the train pulled in the home of golf.

“Say, what abandoned course is this?” he said to the man next to him.

That would be the Old Course at St. Andrews, and Snead quickly learned to respect the ancient ground. He opened with rounds of 71-70, pulled into a share of the lead with Johnny Bulla and Dai Reis with a 74, and then closed with a 75 to win by four shots over Bulla, a fellow American.

He did not return the next year.

Arnold Palmer gets credit for invigorating the Open when he came across in 1960 as part of his quest to win the Grand Slam. Since then, more Americans began playing golf’s oldest championship. His influence was a little more direct on Tony Lema.

The Bay Area native known as “Champagne” Tony wasn’t sure he wanted to play at St. Andrews in the 1964 British Open. Palmer talked him into it, though Lema asked if he could borrow Palmer’s putter and his caddie, Tip Anderson.

It was a winning combination.

Lema shot a 68 in the second round to take the lead, shot another 68 to stretch the lead and won by five shots over Jack Nicklaus. It was his fourth victory in a six-week span. Two years later, the rising American star died in a plane crash.

Tom Watson wasn’t a complete stranger to major championships when he showed up at Carnoustie in 1975, but he didn’t know much about links golf. A year earlier, Watson was 24 when he took the 54-hole lead at Winged Foot in the 1974 U.S. Open, only to close with a 79 and tie for fifth. A month earlier, Watson was the 36-hole leader at Medinah in the U.S. Open until a 78-77 weekend.

That changed in Scotland. Watson overcame a three-shot deficit to Bobby Cole in the final round and made a 25-foot birdie putt on the final hole for a 72 to tie Jack Newton, one shot ahead of Jack Nicklaus and Johnny Miller. In the playoff, Watson shot 71 for a one-shot victory over Newton.

That made him the third American to win the Open on his first try.

Ben Curtis remains the longest of the long shots to win the British Open, accomplishing the feat in 2003. He was a 26-year-old rookie from Ohio who tied for 13th at the Western Open in Chicago. Back then, that was a primary avenue for Americans to qualify for the British Open.

No one really paid any attention to him all week, even though Curtis was never far from the lead. He was three behind going into the weekend, and two shots back of Thomas Bjorn going into the last round. Against an All-Star leaderboard that featured Tiger Woods, Vijay Singh, Davis Love III and Sergio Garcia, Curtis closed with a 69 by making an 8-foot par putt on the last hole.

Then, he waited. The Open appeared to belong to Thomas Bjorn until he took three shots to get out of a bunker on the 16th hole. Curtis won by one shot, becoming the first player since Francis Ouimet in the 1913 U.S. Open to win a major on his first try.

Ben Curtis was the long shot. For Ben Hogan, this was his only shot.

Hogan played a limited schedule since nearly losing his life in a car accident in 1949. But he was on top of his game in 1953, winning the Masters by five shots and the U.S. Open at Oakmont by six shots over Sam Snead.

Everyone had to qualify for the British Open in 1953, and Hogan was no exception.

He opened with rounds of 73-71 at Carnoustie, and then pulled into a tie for the lead with Robert de Vicenzo after a 70 in the third round. Completing a perfect year in the majors, Hogan closed with a 68 for a four-shot victory. He played in only three majors that year and won them all. Hogan could not play the PGA Championship because his battered legs would not allow him 36-hole matches; besides, British Open qualifying was the same time as the PGA that year.

In his one shot at the Claret Jug, Hogan won to complete the Grand Slam. It was the last major championship he won.