Best moments in 10 previous meetings of the Presidents Cup 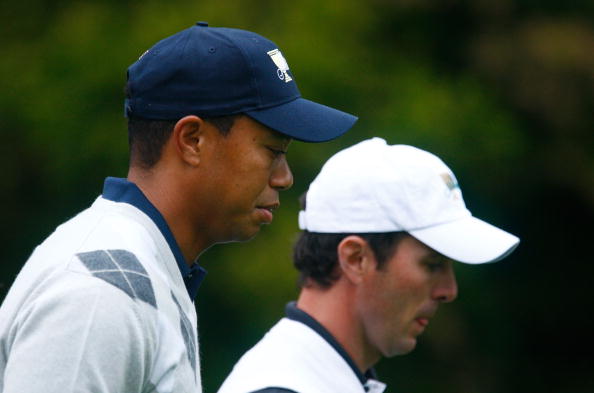 The 10 best moments from the Presidents Cup, which will be played Oct. 8-11 at Jack Nicklaus Golf Club Korea in Incheon, South Korea:

10. OH, CANADA:
Mike Weir, at No. 20 in the standings, was a captain’s pick for the 2007 Presidents Cup in Canada. Even though the Americans had a huge lead at Royal Montreal going into Sunday, the Canadian faced Tiger Woods with a nation watching. Weir made a birdie to square the match on the 17th. On the final hole, Woods’ tee shot failed to clear the water on the left. It splashed down right in front of a pair of fans holding a Maple Leaf flag. The Americans won the cup. Weir won a match that felt almost as big.

9. NICE GUY NICK:
The Presidents Cup was never more packed with emotion than in South Africa in 2003. The matches were close from the start, particularly on Sunday, and especially Nick Price against Kenny Perry. Perry won three straight holes. Price won the next three holes. It came down to the 18th hole, and Price had a birdie putt to halve the match. He missed, and walking off the green, he broke his putter over his knee.

8. BOOM BOOM:
For the longest time, Fred Couples was the American face of the Ryder Cup. He secured victory in 1996 with a 35-foot birdie putt and a celebration that was vintage Freddie. As he raced off the green, he grabbed a hat off the head of a caddie and threw it in the air, and then butchered a high-five with Davis Love III. Nine years later, Couples made a critical putt to beat Vijay Singh, dropping his putter and walking away. As a captain, he went 3-0.

7. THUNDER DOWN UNDER:
The Presidents Cup was held in Virginia the first two times, and the International team demanded a home game. So it went to Royal Melbourne in 1998, and the Americans were so stacked that International captain Peter Thomson introduced them as the “greatest collection of golfers in the world.” Just not that week. The event was so lopsided that Nick Price secured the winning point by beating David Duval before breakfast had stopped being served. The final score was 20 1/2-11 1/2.

6. AQUAMAN:
Woody Austin tried to play a shot from the bank of a lake on the 14th hole at Royal Montreal in 2007 when he lost his balance, stumbled backward and fell face-first into the water. The one-liners were endless. The fans called out “Marco” and “Polo” the rest of his match. U.S. captain Jack Nicklaus put him in the lineup the next day and announced him as “Jacques Cousteau.” Austin played along and showed up Sunday wearing snorkeling gear.

5. GRAHAM’S OUSTER:
The early days of the Presidents Cup brought controversy that would have made the Ryder Cup blush. Two months before the 1996 matches, the International team met at the British Open for what amounted to a coup. They demanded David Graham be ousted as captain. He resigned, though he felt the players had defamed his character. Some players felt the planning for the matches was being ignored. Others, particularly South Africans and Australians, wanted more say in choosing the captain. Peter Thomson took over, and the Americans still won.

4. DIMARCO’S MOMENT:
More than any of his three PGA Tour victories, the career highlight for Chris DiMarco might have been his 15-foot birdie putt on the 18th hole at Robert Trent Jones Golf Club to win the 2005 Presidents Cup. DiMarco was in the final match against Stuart Appleby, and when the putt went in, he ran across the green and straight into the arms of captain Jack Nicklaus.

3. THE DEPARTURE:
The second Presidents Cup was compelling and not decided until Fred Couples make a 35-foot birdie putt on the 17th hole. But the final day of the 1996 matches was missing a large faction of the national press. That same week, 20-year-old Tiger Woods was playing the Quad City Classic in his third start as a pro, and he had a one-shot lead. Golf writers from the largest national publications left Virginia for a small town in western Illinois to watch Woods. The Americans won. Woods lost.

2. TIGER WHO?:
The Americans rolled to victory in 2000, but Tiger Woods managed to find motivation. He played the Sunday singles match against Vijay Singh, a matchup between the major champions of the year (Singh won the Masters, Woods won the rest). Paul Tesori, the caddie for Singh, thought it would be funny to write “Tiger Who?” on the back of his cap. Woods apparently didn’t. Woods made bogey on the fourth hole and refused to concede Singh’s 10-foot birdie putt, or the 18-inch par putt that follow. Woods beat him on the 17th hole. Asked later what he thought about it, Woods replied, “2 and 1.”

1. THE TIE:
The best Presidents Cup is the one nobody won. The rule for 2003 in South Africa was if the matches ended in a tie, each team would pick one player for a sudden-death playoff. Ernie Els and Tiger Woods were picked, and the tension was thick. Els made a 12-foot putt to halve the second extra hole. On the next hole, when it was so dark it was tough to read the break, Woods made a 15-foot putt that broke two directions for par. Els faced a 6-foot putt with both teams camped around the green. He made it for a halve. Instead of returning Monday morning, captains Jack Nicklaus and Gary Player agreed it was best to end it as a tie and let the teams share the cup. Woods said it was one of the most nerve-racking putts he had ever faced, to which Robert Allenby replied, “Thank god.”