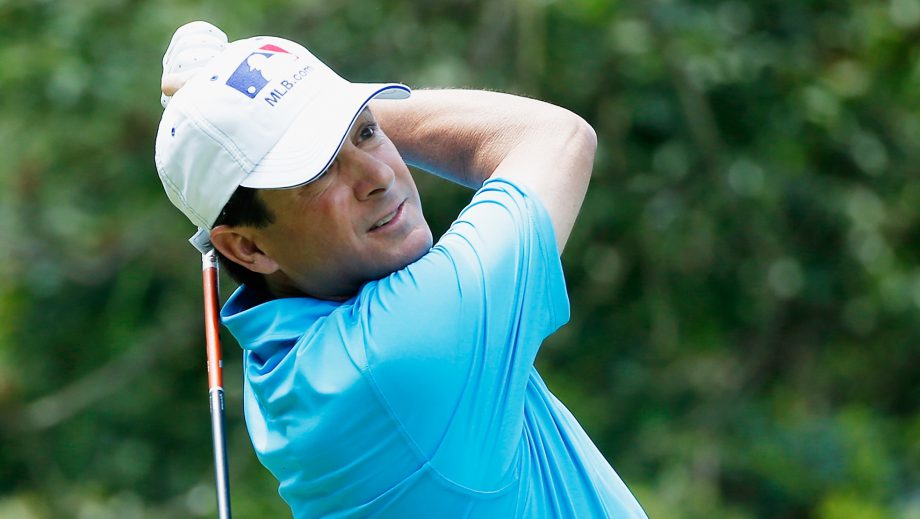 Andrade had seven birdies and a three-putt bogey on No. 14 at Wakonda Club. The four-time PGA Tour winner teamed with Joe Duran to win the Legends of Golf in April for his first Champions Tour title.

“I love this place,” Andrade said. “I just think it’s like a where I grew up in Rhode Island, so it’s tree-lined, it’s like a mini-Westchester I kind of call it. I just think a fabulous place and it played very nicely today I thought.”

Andrade rebounded from the bogey on the par-3 14th with a birdie on the par-5 15th and birdied the par-4 18th for a share of the lead.

“You’ve got to, obviously, drive it in the right places and you have to get a little lucky on some tee shots if the ball stays in the fairway, so you have to have a little imagination off the tee,” Andrade said. “Then it’s hitting greens and getting it in position where you’re not above the hole all day and you have chances to make birdies. There’s a lot of birdies out there and the course is in great shape. It’s a fun track to play. If you don’t pay attention you can get beat up a little bit.”

Coceres, from Argentina, had six birdies – four on the final seven holes – in his bogey-free round. The two-time PGA Tour champion is winless on the 50-and-over tour.

“I played very well,” Coceres said. “Very happy for my golf from putter, everything, very good. … The course is in very good condition.”

“It was nice to get off to a good start,” said Pernice, a playoff winner last year over Doug Garwood. “Great weather conditions, the golf course is in great shape, so to get in 5 under is a good start. Got away with a few sloppy shots at times and just didn’t drive the ball as well as I could have, but had some good recoveries, hit some good putts.”

Bernhard Langer and Canada’s Rod Spittle topped the group at 68 and held a share of 10th thru 18 holes.

Another Canuck, Jim Rutledge, opened with a 75.