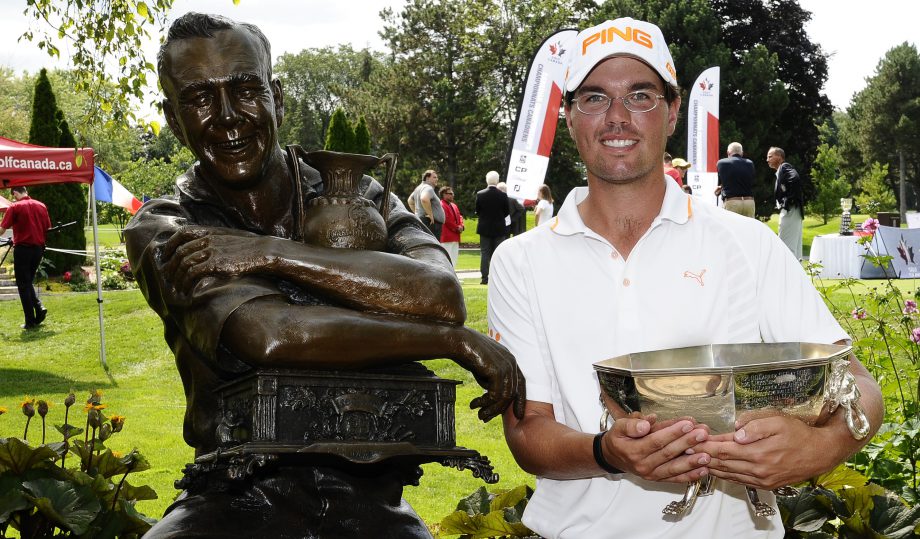 “It’s really nice to win, especially the Canadian Am,” said the graduate from Clemson University. “It’s a huge tournament and a national championship is always nice. On top of that, to win where Arnold Palmer won his first tournament, that’s really special and something I’ll never forget. I’m honoured to be the Canadian Amateur champion.”

Kennerly began the day with a front-nine 38, but settled in with four birdies across his final nine holes to complete the tournament at 12-under 275. “I got off to a slow start,” the 22-year-old explained. “I wasn’t quite putting my best and I just wasn’t quite hitting the ball where I needed to hit it. On the back nine, I just hit better and made a couple of adjustments with my putting which really made a big difference in my scoring.”

With the victory, Kennerly has secured a spot into the 2016 RBC Canadian Open at Glen Abbey Golf Club in Oakville, Ont. The 107th playing of Canada’s National Open Championship is set to take place July 18-24, 2016. “That’s a really big honour,” added the winner. “I’m looking forward to next year, I can’t wait.” Kennerly is slated to compete in the 2015 U.S. Amateur Championship at Olympia Fields Country Club in Olympia Fields, Ill.

Three players finished 6-under 281 to claim shares of second. Garrett Rank entered the third round tied for 13th place. An eagle and five birdies propelled the Elmira, Ont., native up the leaderboard. “I got off to a great start. After having a bad start yesterday when I was 3-over through three, today I was 3-under through three, so that led to some good momentum going forward. Overall, it was a really good day.”

Rank claimed victory at the Investors Group Ontario Mid-Amateur Championship before representing Canada at the Toronto 2015 Pan Am Games and competing in the 2015 RBC Canadian Open. “It’s been a busy summer, my game has been close. I’ve been able to play in some really cool events and it was a good experience moving forward. It was nice to get a good result here this week.”

From August 25-28, the reigning Canadian Mid-Amateur champion will defend his title at Abercrombie Golf Club in New Glasgow, N.S. “I’m really looking forward to that. It’s a big opportunity to get into the RBC Canadian Open again next year. I have the U.S. Amateur Championship next week, so hopefully I can take my momentum here and try to get into match play, and then move on from there.”

Jake Shuman earned his share of second following a seven-birdie, 4-under final round. Completing the trio knotted in second was Hugo Bernard of Mont-Saint-Hilaire, Que. The 20-year-old, who also earned a runner-up finish at this year’s Quebec Men’s Amateur Championship, carded three birdies and an eagle for a final round of 69.

Kevin Carrigan shot the low round of the day with nine birdies in a 7-under performance. The Victoria, B.C., native finished in a five-way tie for 6th place alongside Team Canada Development Squad member Patrick Murphy. The Crossfield, Alta., native and UCLA Bruin led the national team contingent with a combined 4-under 283 showing.

Played in conjunction with the tournament’s first 36 holes is an inter-provincial team championship. The competition saw 12 provincial and territorial teams compete for the Willingdon Cup with Team British Columbia emerging victorious. The squad comprised of Stuart Macdonald (Vancouver), Jared du Toit (Kimberley) and Kevin Kwon (Maple Ridge) combined for a total of even-par 286 to claim a 3-stroke victory.

The Canadian Men’s Amateur Championship is the third-oldest amateur championship in the world. The 2016 edition is set to take place August 8-11 at the Royal Ottawa Golf Club in Gatineau, Que.

Additional information regarding the 2015 Canadian Men’s Amateur Championship can be found here.