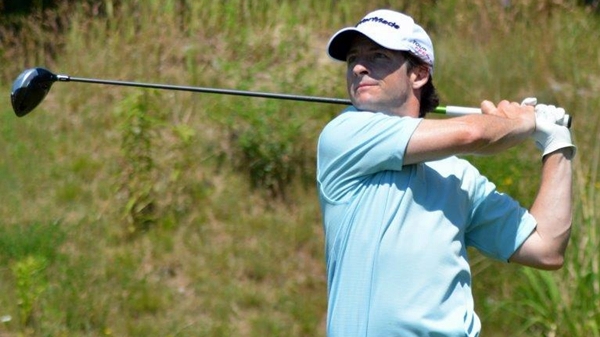 If there is a silver lining to Billy Walsh’s second consecutive loss in the finals of the PGA Championship of Canada sponsored by Mr. Lube and presented by TaylorMade-adidas Golf it is that he’s headed to the RBC Canadian Open at The Royal Montreal Golf Club.

Once again, Walsh, the No. 1 ranked player coming into the championship, had a stellar week as he finished the match play tournament at 5-1 at ClubLink’s awesome Wyndance Golf Club designed by the one-and-only Greg Norman.

No. 3 seed, Dave Levesque from Pure Golf Experience in Montreal rallied from 2-down after 10 holes to win 2-up. The 40-year-old, who worked for ClubLink at The Country Club and RattleSnake Point Golf Cclub from 2007 through 2010, takes home a first-place cheque for $15,000, but more importantly gets his name on the storied P. D. Ross Trophy alongside the likes of; Moe Norman, Bob Panasik, George Knudson, Lee Trevino, Al Balding, Arnold Palmer and many other golf legends.

“If you had told me on Tuesday morning before I teed it up that I would finish second and stay on top of the points race to get into the RBC Canadian Open I would have taken it right then and there,” said Walsh who was all-square with Levesque after 13 holes. Uncharacteristically, Walsh missed the fairway with his drives on Nos. 14, 15 and 16. He found himself trailing by two heading to the par-3, 17th. Walsh won that hole with a par, as Levesque missed the green with his 210-yard tee shot and then two-putted to take the championship to No. 18.

With Levesque out-distancing Walsh 30 to 40 yards on every hole, both players hit the fairway, on the par-5 with their drives. Walsh’s second shot drifted left down into the sand pit. It took nearly the full five minutes before a spectator found Walsh’s ball amongst the dozens in the waste area. After taking an unplayable penalty and missing his next putt, Walsh conceded the loss.

“I focused a lot of my energy on this morning’s round because I knew if I won it I would get the exemption into the Canadian (Open) and that really has been my goal all season,” said Walsh, who earned $10,000 for finishing second. “When I won that one it felt like a big weight was lifted off my shoulders and I might have lost a bit of my edge.”

Walsh said when he was 2-up after 10 holes, he started to think about winning the championship and that might have thrown him off his game a bit, rather than just playing a hole at a time. Craig Smith, who caddied for Walsh throughout the week, will caddie for him when the PGA Tour goes to Royal Montreal.

“My goal for the RBC Canadian Open is to play really well. I want to focus on playing my game and see how I do. I want to play well on Thursday and Friday and see where that puts me. I might miss the cut by five or I might be in the top-10, but I just want to play well,” added Walsh who picked up 50 ranking points and remains as the No. 1-ranked player from the PGA of Canada Player Rankings presented by RBC. In the third place match, Chris Barber, the No. 15 seed bested the No. 60 seed Christophe Belair.

When it came to the golf course, the two finalists heaped praise on the award-winning Greg Norman design and the course conditioning. “It’s a very unique design. You don’t see this style of design very often. Greg Norman did an awesome job,” Walsh said, noting the greens were some of the best he’s ever putted on.

“This is the first time I have played the course. It’s the only ClubLink course that I didn’t get to play when I was working here and I loved playing it. It’s one of the best ClubLink courses I have played,” said Levesque who moved into second place in the player rankings after picking up 60 points for the win. “I took so many photographs during my practice round to bring back with me to show everyone because it’s so beautiful.”