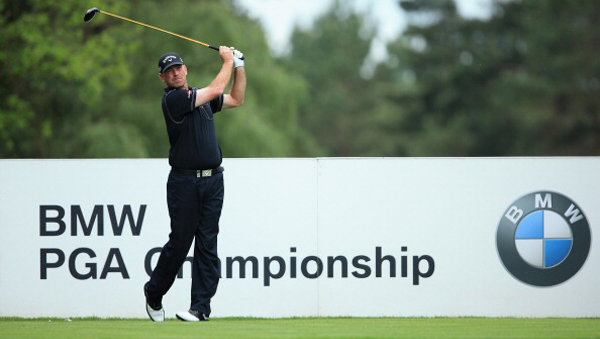 VIRGINIA WATER, England – Thomas Bjorn set a course record at Wentworth with a 10-under-par 62 on the opening day of the BMW PGA Championship on Thursday.

Bjorn grabbed an eagle and eight birdies to end his round two shots clear of Shane Lowry of Ireland, who shot 64 on the West Course.

However, poor weather forced two separate delays totaling nearly two hours in the European Tour’s flagship event, and darkness halted play with 33 in the 150-man field yet to complete their first round.

It is the third occasion in Bjorn’s 21-year European Tour career he’s shot a round of 62, and the Dane rated it the best in his 434 tournaments.

Bjorn is contesting his 17th BMW PGA, with his best finish being a share of fifth in 1988, and comes after he missed the cut in the Spanish Open last week with 75-78.

“Last week was awful, and I was starting to feel a bit frustrated with things, and to be honest in practice, it hasn’t been great, either,” he said. “So … today is a little bit surprising.

“I haven’t had the best record here. I haven’t had the best round here. It’s been a long time since I’ve actually had any sort of result on this golf course. It’s not a place when I come in here, I think, `Oh, this is going to be a great week.’ I guess I’ve got to start sticking my head down for the rest of the week.”

Lowry produced his best round since a Carnoustie course-record 64 last October in the Alfred Dunhill Links Championship. He made only 25 putts with an old putter he found in his Dublin apartment.

“I have been messing about here and there with putters, and pulled this one out, got the cobwebs off it,” he said.

Rafa Cabrera-Bello of Spain was alone in third place with a 65, and Gary Stal of France made the most of his last minute call-up by shooting a 66.

Stal was first reserve for the event, and took the place of countryman Victor Dubuisson, who pulled out injured.

“The two eagles helped, and it’s a good round for me around this place,” he said. “It’s a place I’ve notoriously struggled on, but it was good to shoot something in the sixties.”

Henrik Stenson, who can become the new world No. 1 with a good result, also carded 68.

However, defending champion Matteo Manassero of Italy slumped to an 8-over 80 that included a quadruple-bogey nine at the 17th.