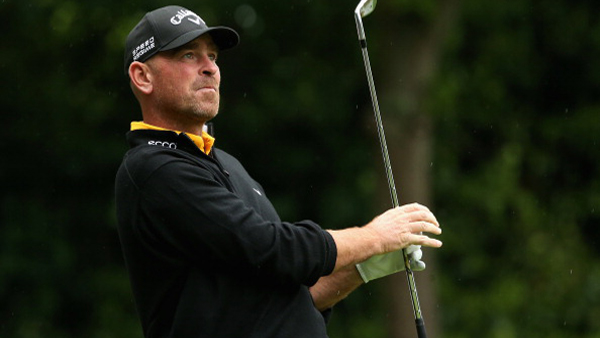 VIRGINIA WATER, England – Thomas Bjorn birdied seven of his last eight holes Saturday to grab a five-shot lead after the third round of the BMW PGA Championship.

The 43-year old Dane fought back from a double bogey on the first hole by making six straight birdies from the 11th and then adding another one at the last for a 5-under 67. His 15-under total of 201 put him five shots clear of Luke Donald at the European Tour’s flagship event at Wentworth.

Donald, a two-time former BMW PGA winner, birdied his closing two holes for a 68. Ireland’s Shane Lowry shared the overnight lead with Bjorn but shot a 73 to sit another shot back in third.

Rory McIlroy was in a tie for fourth after a 69, seven shots behind Bjorn.

Bjorn is competing in the event for the 17th time, but publicly disagreed with changes to the famed Surrey course in 2010 and skipped the event the following year. He returned in in 2012 to finish 37th and then further down the board in 40th place last year.

“I’m starting to warm to this place,” Bjorn said. “But after the double at the first it was just a question of trying to hang in and trying to get the best out of it and just see if you can roll in a few putts here and there. That happened, and probably a bit in excess on the back nine.”

A win would earn Bjorn one of the biggest prize checks of his career $1.059 million, and would also cement his place in September’s European Ryder Cup team and a first appearance in 12 years since being a member of the victorious 2002 team.

The start of play was delayed by three hours because of a rain-soaked course that saw a lot of players struggle early.

McIlroy also had a double bogey on the first hole, before recovering with five birdies the rest of the way. And the double major winner hasn’t given up hope of catching Bjorn.

“I’ve had big leads and let them slip, and come from behind and won, so there’s a lot of ways to win,” McIlroy said. “There is still 18 holes of golf to go, but I’m going to need something very special.”