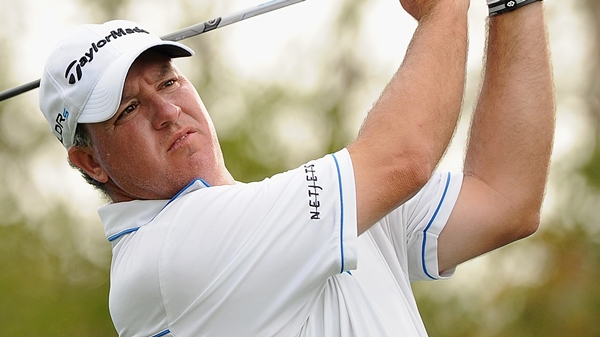 GOLD COAST, Australia — American Boo Weekley made five birdies and an eagle on his way to a 6-under 66 at the weather-affected Australian PGA on Thursday and a two-stroke lead over a group that included defending champion Adam Scott.

Weekley and Scott finished their rounds on the Royal Pines layout before lightning caused afternoon play to be suspended twice, the first time for three hours.

Play will begin at 5:30 a.m. Friday to allow more than 50 golfers to complete their first rounds.

Jarrod Lyle, playing regularly after recovering from his second bout of leukemia, shot 69, and fellow Australian Marc Leishman was also 3-under after 14 holes.

“I struck the ball solid, kept it in play, hit one bad drive and got away with it,” said Weekley, who is playing his third Australian tournament in four weeks.

Scott made an improvement on his opening rounds at the recent Australian Masters and Australian Open, where he failed to break par.

“It was a pretty solid start,” Scott said. “I can always find reason to be better, but I’ll take that considering the starts I’ve got off to the last couple of tournaments.

“I didn’t make a ton of putts today, so if you can have a hot day with the putter certainly getting in at eight-under in a day is not unrealistic around here.”