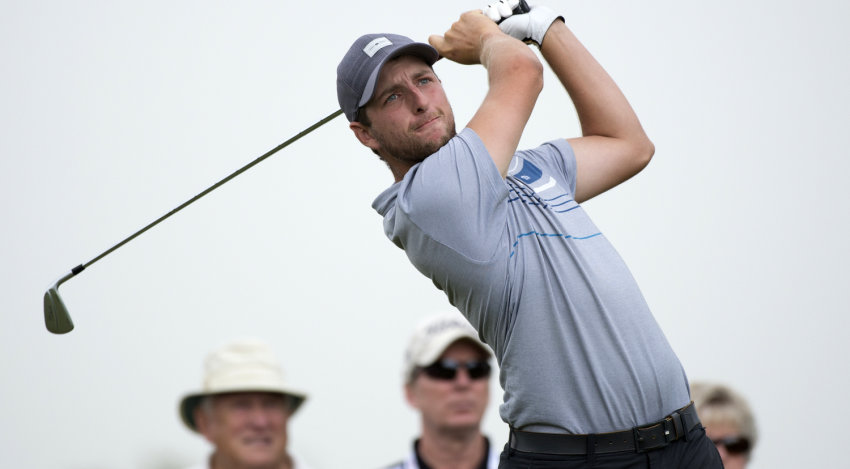 Chilliwack, British Columbia’s Brad Clapp birdied the final two holes at Loyalist Golf and Country Club on Saturday to shoot a 4-under 68 and maintain his lead at The Great Waterway Classic, the ninth event of the 2015 Mackenzie Tour – PGA TOUR Canada season.

Clapp, who was born in nearby Trenton, Ontario and raised for the first 10 years of his life in southeastern Ontario, maintained the two-shot lead he began the day with, capping his round with a two-putt birdie on the par-5 18th to sit at 18-under through 54 holes.

“It always feels good finishing birdie-birdie, especially to keep the lead. I didn’t really feel like I had my best today, so watching that leaderboard I knew I had some to work to do,” said Clapp, whose closing birdie came after another at the 17th where he stuck a wedge inside 10 feet and rolled in the putt for birdie.

The 28-year old was two strokes ahead of San Antonio, Texas resident Tom Moore through three rounds and said he was surprised when he saw his name atop the leaderboard on the back nine with so many low scores posted earlier in the morning.

“I’m actually surprised that 18-under is still in the lead, knowing how good these guys are. I expected to start the day without the lead. This Tour’s so good, and watching the scores this week has been crazy. I kind of thought I’d be chasing guys when I get on the first tee,” said Clapp.

The 54-hole lead is Clapp’s first on the Mackenzie Tour, putting the second year Tour player in unfamiliar territory. Still, Clapp said he would draw on other successful competitive experiences, including wins at the 2012 PGA of BC Championship and the Vancouver Open on the Vancouver Golf Tour earlier this month.

“That [Vancouver Open win] was a come-from-behind victory, so this would be a little bit different, but having the taste of success is huge no matter what level you’re on,” said Clapp. “I’ve been struggling to keep my mental game in shape all year, so it’s nice that I can draw from this round not having my best but still staying calm and patient and just plugging along. It’s a huge confidence boost.”

One shot behind Moore at 14-under were Maryland’s Kyle Stough and Florida’s Chase Seiffert, each of whom secured two-putt birdies of their own at the 18th. A group of seven players, including Order of Merit no. 5 Albin Choi and Oklahoma’s Talor Gooch, who shot matching 8-under 64s in the same pairing, were one shot further behind.

“I was a little disappointed I didn’t get in last week, but I came out here and wanted to prove something, so here I am,” said Moore, who did not get into last week’s National Capital Open to Support Our Troops as an alternate and spent the week caddying for Ohio’s Ross Beal, who finished fourth.