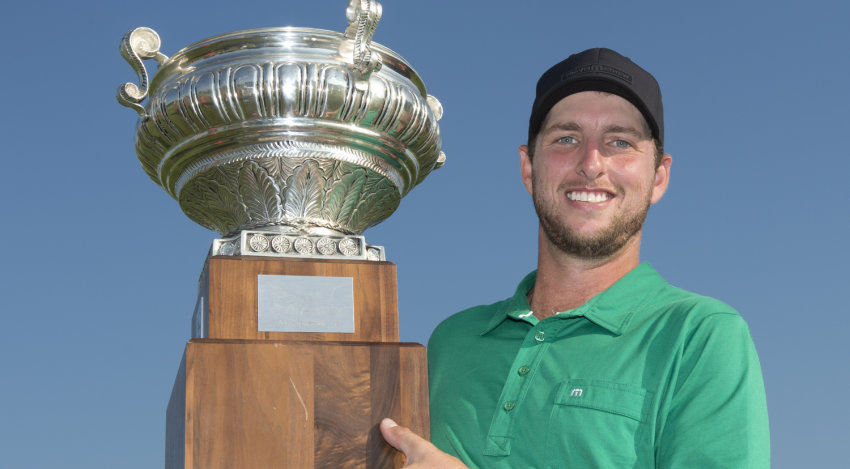 Chilliwack, British Columbia’s Brad Clapp eagled the 72nd hole to shoot a final round 5-under 67 Loyalist Golf and Country Club on Sunday and cap off a win at The Great Waterway Classic, earning his first Mackenzie Tour – PGA TOUR Canada victory.

The 28-year old, who was born in nearby Trenton, Ontario and raised for the first 10 years of his life in southeastern Ontario won by four shots over Toronto’s Albin Choi, Indiana’s Seath Lauer, Michigan’s Ryan Brehm, England’s Charlie Bull, California’s Ben Geyer and Florida’s Chase Marinell.

“It still hasn’t sunk in yet. It’s a little surreal, knowing how good this tour is and knowing how good you have to play four days in a row. It’s a huge accomplishment,” said Clapp, who moves to seventh on the Order of Merit with three events to go.

Clapp began the day with a two stroke lead over Texas’ Tom Moore, and started out with eight straight pars to fall behind Lauer, who posted the clubhouse lead with an eagle at the last for a 19-under total. Clapp admitted that the pressure of the lead got to him starting out, but that a patient approach helped him through the toughest spots of the day.

“I think there was a little bit of nerves on the first few holes for sure. I just couldn’t make the putts that I was the first couple of days. I just tried to stay calm. I knew I had more holes to play than anyone else out there, even if they were ahead of me,” said the second year Mackenzie Tour member.

Clapp was spurred on by a large following of spectators including family and childhood friends, giving the British Columbian a surrogate home-field advantage at Loyalist.

“I didn’t realize I had that many people that knew me out here still. There was always someone saying ‘come on Brad, let’s do this!’ It was nice to have as much of a home crowd as you could. It was a little surreal,” said Clapp, who birdied the ninth and 10th holes to get his round going. “I was hitting good shots. It just got to the point where I just had to focus on putting and get out of my own way and make my read and trust it. Those birdies were huge just to get myself in contention.”

Choi, who began the week at No. 5 on the Order of Merit, made the day’s biggest charge with six birdies in eight holes in the middle of his round to reach 20-under. Clapp, however, took the lead for good with a birdie at the 15th to reach 21-under. Although Choi’s three-putt bogey at the last afforded Clapp a two-stroke advantage, the eventual champion said he didn’t know where he stood until he approached the green, making his 7-iron approach at the last to inside five feet for eagle all the more clutch.

“I knew I needed birdie. I saw Albin was charging and saw him at 20-under with the 18th to go. He made eagle there yesterday, so I knew that was possible. I just wanted to keep my foot on the gas pedal,” said Clapp.

Entering the week at 67th on the Order of Merit, Clapp turned his season around and now puts himself in contention to finish in The Five and earn status on the Web.com Tour for next year.

“I’m not sure where this will put me with the top 20 or the top five by the end of the year, but that’s been my main goal since I got on this tour last year, to move on to the Web.com Tour and keep testing myself again better players. That puts me right in those spots, and we still have three events to go and hopefully I’ll move on up into that top five,” said Clapp.

Choi, who recorded his third top-10 of the season, moves to third on the Order of Merit with three events to go.

“Starting from the first round, I didn’t think I’d have a chance, so it was nice to be in the mix today. It didn’t really hit me until later on the back nine – I was in the zone pretty good and just trying to keep making birdies,” said Choi.

SPAUN CONTINUES TO LEAD THE FIVE

With a T19 finish, J.J. Spaun maintained his spot atop the Order of Merit on Sunday. Below are The Five through The Great Waterway Classic (bold denotes Canadian):