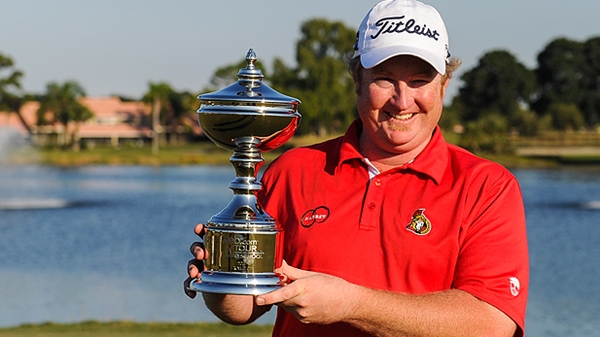 Fritsch played the PGA Tour for the past two seasons, but his 2014 total of $568,391 (U.S.) in earnings left him 140th on the money list and 151st in FedEx Cup points, both outside the top-125 cutoff to retain privileges for 2015. He then failed to earn his way back onto the PGA Tour in the Web.com Tour’s four-event fall qualifying series.

Winning medalist honours gives Fritsch full Web.com Tour status for the entire 2015, meaning he has the flexibility of picking and playing any tournament he chooses.

The Ottawa resident isn’t new to the PGA Tour’s developmental circuit. In 2014, he had four top-10 finishes on the Web.com Tour without a victory. He had also previously maintained Web.com Tour status for next year, but prior to winning was only guaranteed entry into four tournaments before the ranks would be re-shuffled according to earnings.

“I think finally winning is great for my mind,” Fritsch told PGATour.com staff. “Because I was never much of a winner in junior golf, amateur golf, whatever. This is great, because I finally got out to a big, big lead. Usually for me, if I’m in first or second or third with one round remaining, I play an OK round and finish second or third. That’s not terrible, but it was nice to execute in the final round when I had to.

Unfortunately, only one of the other six Canadians in the field were able to crack the top 45. Peterborough, Ont.’s Ted Brown carded a final-round 73 to tie for 35th at 8-under 421.