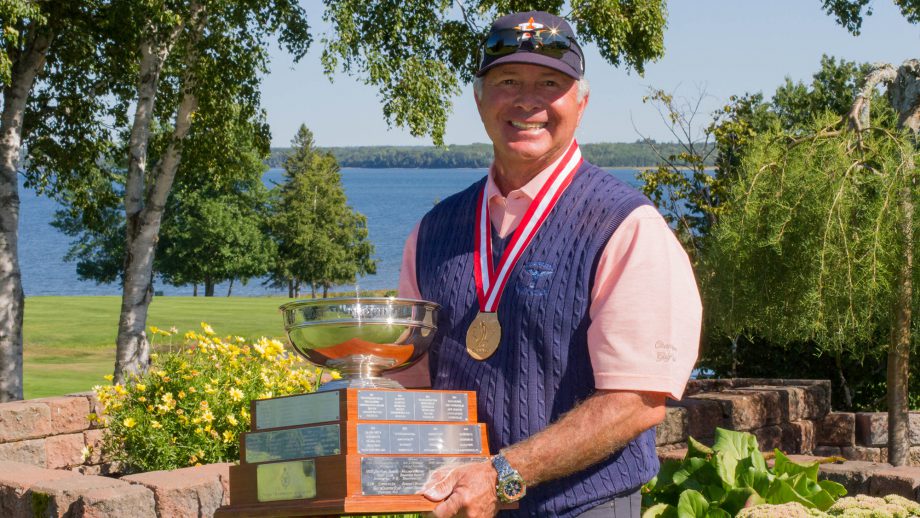 BATHURST, N.B. – American Brady Exber closed out a strong performance with a final-round 73 (+1) on Friday to claim the 2018 Canadian Men’s Senior Championship at Gowan Brae Golf and Country Club.

Exber held a share of the lead in the opening round and never looked back, extending his advantage to capture a 7-stroke victory and hoist the John Rankin Memorial Trophy. The 62-year-old Las Vegas native finished the 72-hole event at 10 under par (278) ahead of Canadian runner-up Peter Detemple.

“It was just amazing when I made that last putt,” said Exber, who becomes the ninth American to win the Canadian Men’s Senior. “Everybody started clapping, and I looked around, I couldn’t believe how many people were watching.”

“I was really nervous starting today, because I had a big lead, and I was thinking ‘OK try to not screw this up’ instead of playing the golf course. You can’t win on the first tee you gotta play all the holes.”

The Las Vegas Golf Hall of Fame member held a third-round lead of nine strokes, thanks in part to a tournament course record 66 (-6) in the third round. With the victory, Exber adds another trophy to a well-decorated shelf over a stellar amateur golf career throughout the years. Among his many accolades, Exber is nine-time recipient of the Southern Nevada Golf Association Player of the Year Award.

Having played many different Nevada courses over his career, Exber shared high praise for the conditions at Gowan Brae.

“It’s a really fun course, the two nines are very different. If you drive it in the fairway here, you can make some birdies. The hospitality here is fantastic.”

He’s also committed to returning to Canada to defend his title at next year’s Canadian Men’s Senior Championship, which will take place Sept. 10-13 at Cedar Brae Golf Club in Scarborough, Ont.

“Absolutely I’m going to defend my title, I’m looking forward to it. I really do look forward to coming to Canada—it’s one of three tournaments in the world for senior amateur golf.”

Detemple, a Vancouver native currently residing in Lexington Park, Md., couldn’t quite match Exber after the two shared the 18-hole lead. Instead, he was battling 2017 champion Gene Elliott of West Des Moines, Ia., who finished in solo third at 1 under for the tournament, two back of Detemple.

Doug Roxburgh, an honored member of the Canadian Golf Hall of Fame, hung on to capture the Super Senior Division (ages 65+) by two strokes. The Vancouver native finished tied for 11th at 11 over par (299). Quebec’s Michel Roy was in position to win but finished bogey, double-bogey to open the door for Roxburgh.

“It was one my goals and it’s really nice to have accomplished it,” said Roxburgh. “I turned things around and played pretty steady on the back. It was a good day of golf and Michel is just a tremendous player.”

On Wednesday, Team British Columbia captured the inter-provincial team championship with a score of 9 over par. Team Alberta and Team Quebec finished one stroke back with a share of second.

Additional information, including complete scoring info for the 2018 Canadian Men’s Senior Championship can be found here.