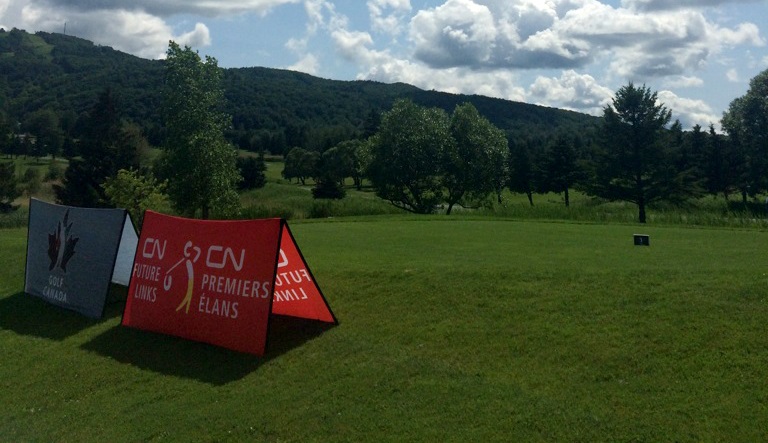 Clear skies set the stage for the first round of the CN Future Links Quebec Championship at Golf Château-Bromont located in Bromont, Que. Brandon Lacasse took full advantage of ideal conditions and leads the Junior Boys division by one stroke. Céleste Dao and Alexandra Naumovski finished strong to climb to the top of the Junior Girls leaderboard.

Lacasse posted the clubhouse lead with a 3-under 69. The Châteauguay, Que., native made the turn at even-par with two birdies and two bogeys on the card. He opened the back nine with a birdie on hole 10, then proceeded to make six straight pars before finishing with back-to-back birdies.

Lacasse, who finished T3 in the 2013 edition of this competition, was followed closely by Antoine Beaupré-Vachon of Montreal, Que., and Charles-David Trépanier of Québec, Que., who both carded rounds of 2-under 70. Beaupré-Vachon’s performance was highlighted by four birdies and a string of nine straight pars to finish the day. Trépanier concluded his round with an eagle on the final hole. The crowded leaderboard features five Junior Boys two shots back of the lead at 1-under 71.

In the Junior Girls division, Céleste Dao of Notre-Dame-de-L’Île-Perrot, Que., and Alexandra Naumovski of Hornby, Ont., captured the lead with rounds of 2-over 74. Dao kept herself in contention with a strong back nine performance that included two birdies. With a late birdie on 17, Naumovski claimed her share of the lead.

Two shots back in third place with rounds of 4-over 76 are Noémie Paré of Victoriaville, Que., and Madeline Marck-Sherk of Ridgeway, Ont. The Junior Girls division is also tight at the top with four golfers tied for fifth place with a score of 77, including defending champion Alyssa Getty of Ruthven, Ont., and Annie Lacombe of Laval, Que., the reigning Quebec Junior Girls Champion.

The top six finishers in both the Junior Boys and Junior Girls divisions at the CN Future Links Quebec Championship will receive exemptions into their respective national championships. The 2015 Canadian Junior Boys will be contested from August 2-6 at Summerlea Golf and Country Club in Vaudreuil-Dorion, Que., while the 2015 Canadian Junior Girls Championship will be hosted by Deer Park Golf Course in Yorkton, Sask., from August 3-7. The CN Future Links Quebec Junior Girls champion will also receive an exemption into a 2016 Canadian Women’s Tour event of their choice.

The second round of the CN Future Links Quebec Championship will begin tomorrow morning with the first group of Junior Girls teeing off at 7:30 a.m. ET followed by the Junior Boys at 9 a.m. ET.