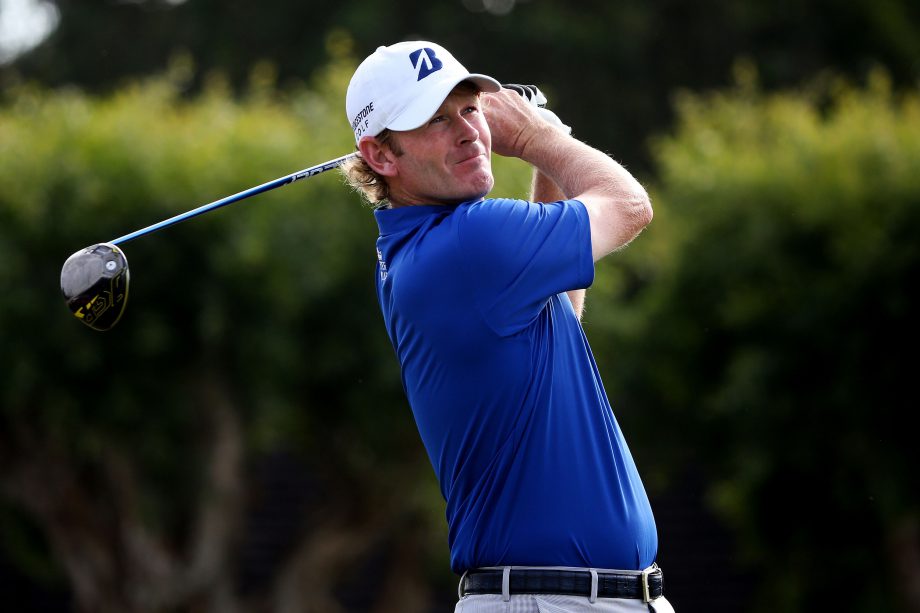 HONOLULU – A new driver, a new swing and Brandt Snedeker is starting to feel just like new.

Coming off a great weekend at Kapalua, Snedeker played bogey-free Friday and rolled in a couple of long birdie putts that carried him to a 5-under 65 and a one-shot lead over Kevin Kisner after two rounds of the Sony Open.

“I feel like I’m playing great, so it should be fun,” Snedeker said about the weekend at Waialae.

It could be fun for a lot of players.

Two dozen players were separated by five shots at the halfway point. Scoring conditions were so ideal that 87 players from the 144-man field made the cut, meaning there will be a 54-hole cut on Saturday.

Kisner, who played with Snedeker, kept pace with him on Thursday (both opened at 63) and on Friday until a two-shot swing on their 12th hole. Snedeker made a 35-foot birdie putt and Kisner missed a 5-footer for par. Kiser kept his wits even as his putts kept missing. Even though he missed three birdie chances inside 10 feet and had several others in the 15-foot range that caught part of the cup, he hung in there long enough to make a 12-foot eagle putt on his last hole for a 66.

British Open champion Zach Johnson (66) and the resurgent Luke Donald (65) were among those two shots behind, while the group three strokes back included Sean O’Hair and 49-year-old Jerry Kelly. Vijay Singh, who turns 53 next month and can become the PGA Tour’s oldest winner, had a 69 and was four behind.

Dating to his final two rounds on Maui – 65-67 to tie for third – Snedeker is 26 under over his last 72 holes. That beats the way he finished the up last year. He went to the Australian PGA Championship and opened with an 84.

He made a full commitment to an overhaul of his setup, and Snedeker said he worked hard with Butch Harmon and then showed up in Maui early, playing a couple of practice rounds with Jordan Spieth. And it helped that Kapalua’s fairways are among the widest in golf.

“Maui being wide open off the tee a little bit helped me get comfortable with it,” Snedeker said. “And then I realized this week … how it feels, what should happen, and when I do hit a bad shot, I kind of know where it comes from. So I feel way more comfortable with it this week and excited about it, because the bad shots haven’t been near as bad as they have been.”

Kisner was a runner-up in the HSBC Champions and won the RSM Classic at Sea Island in his final two tournaments of 2015, and he started the new year by finishing ninth at Kapalua on a weekend where his putter went cold. And here he is again, contending on the weekend after a year in which he had four runner-up finishes at a victory.

“To go out and play the way I did on Sunday at the RSM with a three-shot lead was a huge confidence builder,” Kisner said. “It wasn’t that favorable that I took a month-and-a-half off after it, but to come back and get right back into the fire and have a chance to win this weekend is going to be huge for me.”

Two-time defending champion Jimmy Walker finished with nine straight pars for a 68 to finish on 3-under 137 and make the cut on the number. He was nine shots back.

Kisner and Snedeker were right of the fairway on the par-4 third, having to punch out low to avoid the palm trees. Kisner’s shot caught a frond and came down short of the green, and he pitched to 5 feet and missed the par putt. Snedeker’s shot ran all the way onto the green, and he holed a 35-foot birdie putt for a two-shot lead.

On the par-3 fourth, Snedeker made a 20-foot birdie putt, and then finished with a good chip out of the rough to 4 feet for birdie on the par-5 ninth.

Kisner’s frustration was starting to get noticeable when he bent over so far that his hands nearly touched his shoes on the fifth, but with that eagle on the ninth, he still was only one shot out of the lead.

“I was proud of the way I stayed patient all day,” Kisner said. “That round could have been a few more bogeys if I’d have let not holing any of the putts get to me, but stayed patient, kept hitting good shots and good way to finish it on 9.”

Graham DeLaet of Weyburn, Sask., sits T36 and leads the Canadian contingent at 5-under 135 following a bogey-free 62. Brantford, Ont., native David Hearn is tied for 47th place at 4-under after carding a 71 on the day, while Abbotsford, B.C., products Adam Hadwin and Nick Taylor are T66 at 3-under.

DIVOTS: All three players who are staying on for the Champions Tour season debut next week on the Big Island – Singh, Fred Funk and Davis Love III – made the cut. … Robert Allenby missed the cut by four shots in his return to Honolulu. He shot a 68 on Friday. That was his lowest score since Aug. 2. … Five players who were at Kapalua last week missed the cut – Russell Knox, Justin Thomas, Chris Kirk, Graeme McDowell and Troy Merritt.