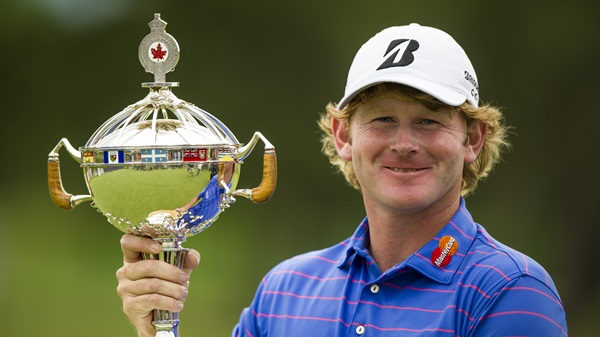 Brandt Snedeker carded a 2-under 70 on Sunday to win the 2013 RBC Canadian Open by three strokes at Glen Abbey Golf Club.

On a breezy day that saw Glen Abbey play much tougher than the previous three rounds, Snedeker held off Dustin Johnson, Matt Kuchar, William McGirt and Jason Bohn who all finished in a tie for second at 13-under par.

Tied with Johnson through 15 holes at 15-under, Snedeker, unaware Johnson had made a triple-bogey on the short par-4 17th, birdied the par-5 16th to lead by three with two holes remaining.

“I had no clue, I don’t look at leaderboard because you can’t control anything anybody else is doing,” Snedeker said following his round. “Coming down 18, it felt like the tension was out of the air. I felt like I had a chance and a pretty cushioned lead to get it done.”

With this win, Snedeker becomes the fourth multiple winner on the PGA TOUR this season and moves to No. 3 in the FedExCup standings.

“This is a tournament I said early on in my career I wanted to win just because my caddie is actually from Canada and it’s his national open,” he said. “It meant a lot to him and it means a lot to me. It’s the third oldest tournament on tour and it has some great history to it and now to put my name on that trophy it means a lot.”

In his 11th appearance at Canada’s National Open Championship, David Hearn of Brantford, Ont., earned low Canadian honours, clinching the Rivermead Cup with a final-round score of 1-over-par 73. Hearn finished T44 at 4-under par 284 for the championship.