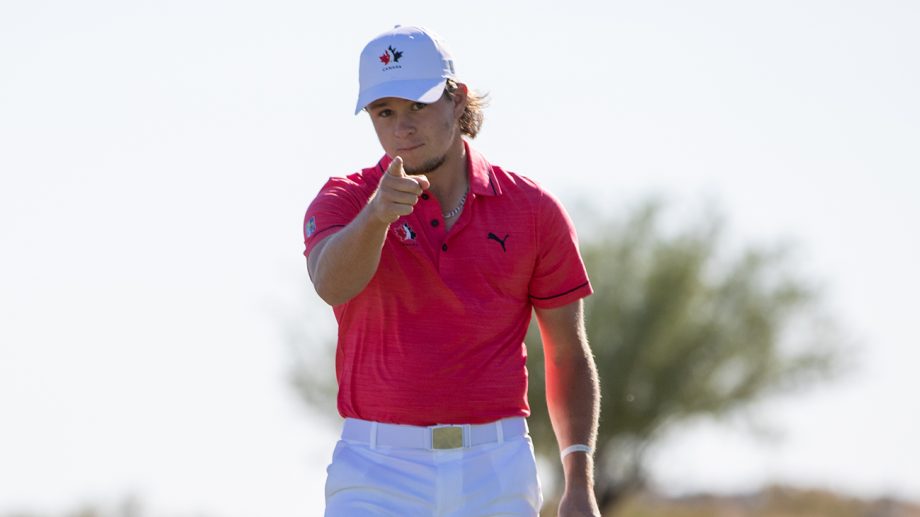 Brendan MacDougall was introduced to the game of golf during his early childhood and it’s become his biggest passion in life. Today, the 24-year-old is one of Canada’s top amateur prospects and has ambitions of competing professionally at the highest level one day.

“I was fortunate that my parents introduced me to the sport at a very young age,” recalled MacDougall, a fourth year member of Golf Canada’s National Team Program.

“When I was three I was hitting plastic golf balls in our backyard and a couple of years later I started hitting actual golf balls,” said MacDougall, who was born in Newport Beach, Calif., and moved to Calgary during his childhood years.

While California had consistent golf weather year round, when young Brendan moved to Alberta his love for the sport remained consistent.

In the seventh grade, MacDougall remembers having thoughts that he was going to be a professional golfer one day.

“It may have just been a pipe dream at the time because I was so young but having that goal made me work a bit harder and be a bit more disciplined.” he noted.

MacDougall says he didn’t spend much time socialising outside of school or going to parties. Instead, he realized golf was his hobby and passion and he was happy to be spending five or six days a week working on his game in practise.

MacDougall’s talents on the golf course would earn him a Division I scholarship to High Point University in North Carolina.

“After I got to High Point University that’s when I really started thinking that my childhood dream of playing golf professionally could be a reality,” he said. “I was determined to put everything I had into and see where it took me.”

After completing his freshman year, he scored a big victory at the 2017 Alberta Match Play Championship. MacDougall beat out a talented field of amateurs to secure the most significant win of his career up to that point.

“Some of the guys in the field were older than me by a few years and I remember looking up to them in high school. So to win that tournament against those fantastic golfers it gave me confidence and made me believe that I could take golf as far as I wanted to take it,” said MacDougall, who would repeat as champion in 2018.

The talented young Canadian would score his first NCAA tournament victory in 2018 as he captured The Big South Championship.

“I started off a little slow but I got incredibly hot for the last 45 holes and I ended up winning the tournament by five or six shots,” he pointed out. “Some don’t get to win a tournament in college and to have my first win at a conference championship was something really special; and it got me into my first NCAA regionals.”

Another notable NCAA triumph came in March of 2020 when he won The Challenge at the Concession.

“We were in Florida for our spring break and it was the last tournament before everything shut down because of the pandemic,” he recalled.

“It was great to win the tournament but it was also super rewarding that as a team we came in second in front of a lot of great teams. And the best part was the bus ride back with the team.”

For his fifth year of NCAA eligibility, MacDougall transferred to the University of Nevada and played in all eight events during his final season of eligibility with the Wolf Pack.

MacDougall says his success wouldn’t have been possible without the support of the National Team Program.

National Team head coach Derek Ingram says the 5-foot-8-inch amateur standout has come a long way during his time in the program.

“Brendan is much more mature and professional in his approach to playing the game. He is longer off the tee and he had to add distance to compete at the highest level – it’s a work in progress but he’s made a lot of improvements,” Ingram noted.

“I love Brendan’s routines – quick, committed and athletic. His pre-shot routine reminds me of Corey Conners or Ricky Fowler. He rides positive momentum really well and is both aggressive and smart.”

For his part, MacDougall has nothing but praise for his National Team head coach.

“Derek is such a great coach and a great person and is dedicated to helping us be the best version of ourselves on the golf course and off. I truly appreciate everything Derek and Golf Canada has done for my game.”

MacDougall points out that one of his biggest short-term goals is to gain status on the MacKenzie Tour-PGA TOUR Canada.

Ingram says if the talented young Canadian amateur continues to apply himself and make the necessary adjustments, he likes MacDougall’s chances of competing professionally at the highest level one day.

“Brendan needs to continue to gain more distance and be more explosive. This will give him shorter clubs in on holes and allow him to play out of the rough much more effectively. He also needs to continue to work on not getting too down and beating himself up – as golf tends to do. I like a positive and patient Brendan MacDougall’s chances,” said Ingram.

As he prepares for a transition from amateur to the professional ranks, the fourth year member of the National Team Program is motivated by the success of others who have gone through the program such as Taylor Pendrith, Mackenzie Hughes, and Corey Conners – just to name a few.

“Its inspiring to know that these players have all been where I am. And I know if I’m working hard and doing what I should be doing, there’s a chance that I could be where they are in five or six years,” said MacDougall.

“It’s a credit to them for being able to pave the way for players like me coming up. And one day I would really like to be able to do that for the younger players also.”