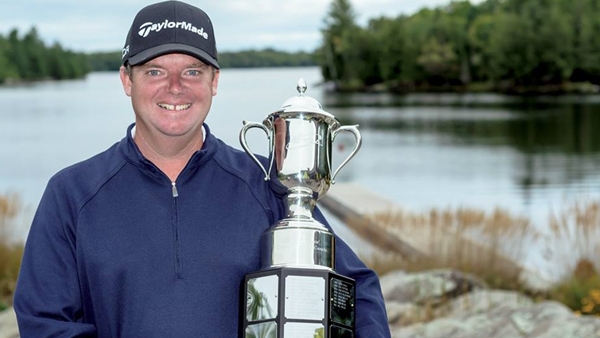 Brian McCann made a dramatic 12-foot par putt on the final hole to win the PGA Assistants’ Championship of Canada presented by Titleist & FootJoy.

“I had 60-yards to the pin on (hole) 18 and with the golf course being this wet, I got the club stuck in the ground,” McCann said about his approach to the par-5 finisher at The Ridge at Manitou in McKellar, Ont. “So, then I have this 10 or 12-yard shot to get up and down and I didn’t really hit that one well either. But I knew I had to make par to win the golf tournament and I made it right in the middle.”

With the dramatic victory, the Brampton Golf Club PGA assistant professional becomes a two-time winner of the PGA Assistants’ Championship, hoisting the trophy previously in 2010.

McCann’s final round 1-under-par 71 included a pair of birdies on the front nine and a lone bogey on the par-5 13th.

“I played good golf all day and my only bogey came from 79-yards on a par-5 when I pulled it left of the green and didn’t get up and down,” he says. “But other than that it was pretty good. I think I only missed three greens all day.”

Thursday’s final round started with McCann, the PGA of Canada’s No.1-ranked player Billy Walsh and two-time PGA Assistants’ Championship winner Bryn Parry all tied for the lead. However, a triple-bogey eight on the par-5 opener by Walsh and three double-bogeys by Parry over the final 10 holes led to over-par rounds, effectively derailing their chances to capture the championship.

Kenney and King on the other hand put together final rounds in the red. Kenney went three under over his last five holes to get to five under for the championship (and two under for the day), while King made six birdies and an eagle on the last en route to his final round 1-under-par 71.

Walsh, who won the PGA Assistants’ Championship last year in Saskatoon finished fourth at 4-under, with Parry rounding out the top five at 3-under.

Edmonton’s Adam Bruce and Alf Callowhill of Burlington finished tied for 6th at 2-under, while Michael Gonko of Sudbury, Ont., wound up alone in eighth place at 1-under for the championship.

In the InterZone competition (compiled of four players on each team representing their respective PGA Zone) the squad from Ontario (Walsh, McCann, Kenney and Jim Kenesky) ran away with the title winning by 20 strokes. Team Quebec finished second and Alberta third.