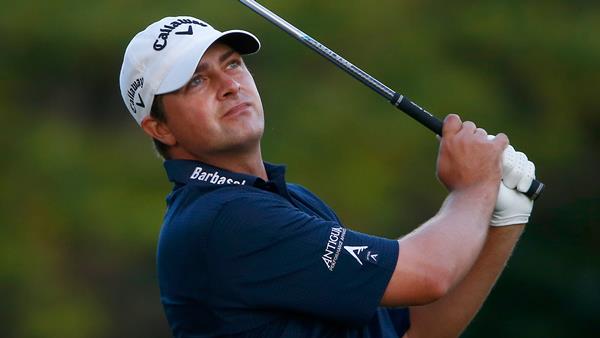 HONOLULU – Fans soaking up the sun along the shores of Oahu took home plenty of memories Friday in the Sony Open, the least of which was Brian Stuard atop the leaderboard with this fourth straight round of 65 at Waialae.

Stuard finished the second round with a hybrid into 2 feet for eagle, giving him a one-shot lead over Marc Leishman of Australia and Hideto Tanihara of Japan.

James Hahn, best known for his “Gangnam Style” moves after making birdie at the raucous 16th hole at the Phoenix Open last year, tried (and failed) for a chest-bump with his caddie after the rarest shot in golf – an albatross – when he holed out from 191 yards with a 6-iron on the par-5 ninth hole.

“That was a little spontaneous, but I forgot that – I’ve got to be politically correct, right? – but white men can’t jump,” said Hahn, a South Korean-born, Cal grad and funnyman on tour. “So I got a little air, he didn’t. But it was fun. I don’t think he knew I was going to chest-bump him. But that’s just what I felt like at the time.”

The big attraction was having surf champion Kelly Slater in the gallery for the final hour, even though he was there to watch a caddie.

Fellow surfer Benji Weatherley is on the bag this week for Masters champion Adam Scott, and he had a blast in front of two dozen friends from the North Shore. But this golf is serious business, and Weatherley showed great confidence talking Scott out of a driver on the 18th hole.

“He’s really getting the hang of it,” Scott said.

Scott took over from there, getting a break on the last hole when his ball was in a partial divot. Scott was able to take a free drop away from the grandstand, and while his chip came out strong, it banged against the bottom of the flagstick and stopped an inch from the hole for a tap-in birdie and a 66.

Scott was only three shots behind. Weatherley was having a blast.

“It’s the most fun you could ever have,” he said. “I have no nerves because for one, he’s so good it’s embarrassing. Like every single shot is what you see on ‘Sports Center,’ especially that last one.”

He said this during an interview with the Golf Channel.

Meanwhile, another good tournament was shaping up in Hawaii.

Stuard was at 10-under 130. Those four straight rounds of 65 ordinarily might be good enough to win a tournament. Except that the first half of that streak happened on the weekend at Waialae last year. Even so, it was enough for him to be in the lead going into the weekend.

It was his seventh straight round in the 60s at Waialae dating to Stuard’s first trip here in 2010.

“I think it’s something to do with the greens,” Stuard said. “I feel comfortable on the greens. I feel like I read them pretty well and I’m able to make putts.”

Leishman also made an eagle on the ninth hole, but that was in the middle of his round. And it was part of a three-hole stretch he played in 4-under, and he made a 25-foot birdie putt on the 14th hole. It led to a 64 that put him in a good spot going into the weekend.

“They’re the sort of things that really turn an average round into a good one, or a good one into a great one,” Leishman said. “It was nice to shoot 6-under and get myself right in it.”

Tanihara had a 65 and will join Leishman and Stuard in the final group Saturday. The tee times were moved up for the third round because of rain in the forecast.

Harris English had his second straight round of 66 and was two shots behind, poised to go for his third win in his last 16 starts.

“I hit it all over the map,” English said. “Yesterday, I striped it down the middle and didn’t make any putts. Today, 4-under was the lowest I could have shot.”

He was scrambling so far that he didn’t realize until the end of his round that he had a glove on his left hand, and another one tucked under the back of his belt. This was not a new craze, like Tommy “Two Gloves” Gainey with gloves on both hands. English was letting it dry out and forgot about it.

Joining Scott in the group three shots behind were Jimmy Walker and Chris Kirk, while Hudson Swafford (64), Justin Leonard and past Sony Open champion Jerry Kelly were still in the mix at 6-under 134.

Kapalua winner Zach Johnson, trying to become the first player since Ernie Els in 2003 to sweep the Hawaii swing, had a 67 and was five shots behind.

Three Canadians are in the field this week. David Hearn sits at 2-under to share 42nd spot, while Mike Weir and Brad Fritsch tied were 5-over and failed to make the 36-hole cut.