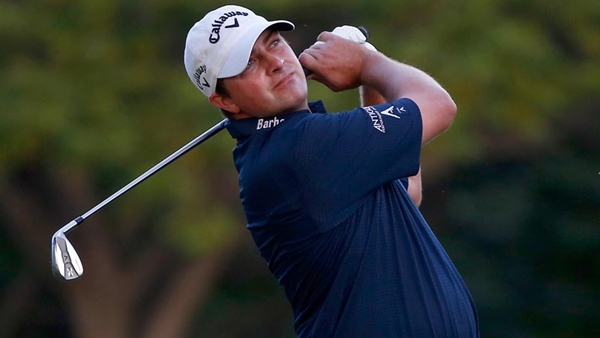 Stuard finished with a 6-under 66, dropping a stroke on the par-4 seventh hole – his 16th of the day – in wind gusting to 20 mph at Trump International Golf Club-Puerto Rico.

“Wind is blowing pretty good out there, so got to hit some good shots,” Stuard said. “I did well. I kept it in play nice off the tee, didn’t get in much trouble, and only made the one bogey.”

The highest ranked player in the field in the FedEx Cup standings at No. 13, Stuard finished second in November in the OHL Classic in Mexico. He also had a strong run in January, fishing sixth in the Sony Open in Hawaii and sixth the next week in the Humana Challenge in California.

“I’ve just been playing pretty solid, but been putting well,” Stuard said. “I putted really good to start off the year and then kind of last few weeks not quite as good and then good today.”

“It wasn’t easy out there,” Lee said. “It was very windy, and there’s some tough pin placements out there, but I played very smart today and I hit it where I wanted to hit it, and I rolled it really nicely with the putter. It was a really good day for me.”

Calgary’s Stephen Ames and Brantford, Ont.’s David Hearn opened with matching 2-under par 70’s and share 32nd spot. Brad Fritsch is a single-shot back of the Canadian pair after a 1-under 71. The Ottawa native is tied for 44th.

DIVOTS: Tommy Gainey withdrew during the round because of an elbow injury. … The winner will receive $630,000 from the $3.5 million purse. … John Daly had a triple-bogey 7 on the par-4 12th hole in a round of 74. … Tom Kite and Bruce Besse Jr. designed the course.