Bridging the gap between amateur and pro golf 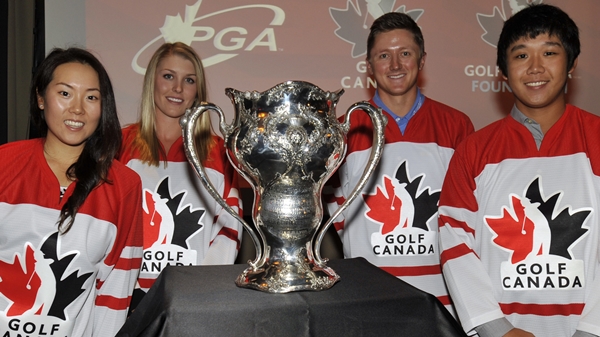 “You know, professional golf is pretty easy. You just go out there, knock a ball around, and then you win.” This, from reigning PGA Tour Canada Order of Merit winner Mackenzie Hughes, elicited laugher from the large crowd assembled at Toronto’s Real Sports on May 5 at the introduction of the Golf Canada Young Pros Program.

However, it was clear that despite the good-natured remark, it was done in jest. Professional golf is difficult, and even with copious resources in place, the best young players in the world sometimes fizzle out.

They run out of money. They can’t find a coach. They aren’t mentally strong enough. These are all common stories that golf fans and followers hear about.

Now, thanks to Golf Canada, the PGA of Canada, and the Golf Canada Foundation, there’s hope that stories like the above will become a rarity, as they’ve, in concert, announced Jennifer Kirby, Sue Kim, Rebecca Lee-Bentham, Mackenzie Hughes and Albin Choi as the first batch of ‘Young Pros’ in the Young Pros Program.

“Heroes shape sports,” said CEO of Golf Canada Scott Simmons. “Rather than have heroes develop by chance, we wanted to have a systematic approach.”

Golf Canada engaged such big names as Graham DeLaet and Ian Leggatt to be a part of selection task force.

The task force, according to chief sport officer for Golf Canada Jeff Thompson, was “ruthless in (their) selection process.”

The goal of the program is to bridge the gap between a player’s amateur days and the start of a professional career.

The five players all receive $50,000 in support each, a $250,000 total investment for Golf Canada. Each player receives cash and a plethora of coaching and conditioning opportunities with a team they have been very familiar with.

The money is coming from Golf Canada’s foundation – which drove funding from private investors, corporate donations and from pro-am tournaments. There will be two this year – one before the RBC Canadian Open, and one before the Canadian Pacific Women’s Open.

To learn more about the Golf Canada Foundation, click here.

Kirby, Kim, Lee-Bentham, Hughes and Choi have all been a part of Golf Canada’s national team in years past, and they’ll receive the same support from coaches Derek Ingram (men), Tristan Mullally (women), and strength coach Jason Glass.

Hearing how difficult it was to select the players for the inaugural program, it appears that now was the perfect time for this initiative to begin.

Various people, players and attendees uttered phrases like: “unbelievable feeling,” and “I’m so excited” on more than one occasion Monday night.

“This program is not just going to make me better, but Canadian golf better,” said Choi. He explained he grew up with his fellow teammates, “like family.”

When asked if he felt more pressure – because there was a spotlight on him – or less – because a financial burden was lifted – the 23-year-old Choi said it was a little of both.

“The support gets me relaxed, but I’m not challenged by anyone. I don’t feel pressure from anyone else, except my own pressure. And that’s a good kind of pressure,” he said.

The players will need to reach certain benchmarks this season in order to continue to be a part of the team moving forward. The men, for example have to reach the top 500 in the world ranking by the end of 2014.

It’s hard to predict the future in golf, in fact, it’s nearly impossible, but, Golf Canada recognized a need for this program in order to build on the success of its national amateur team and as the saying goes: “timing is everything.”

Now, it’s up to the players.