The bright future ahead for Corey Conners 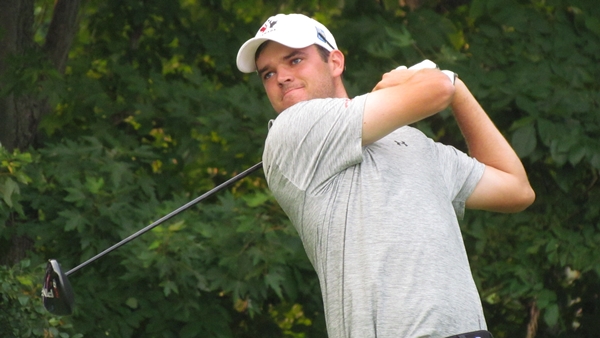 With five collegiate tournament victories to his credit, along with a semi-final appearance at the 2013 U.S. Men’s Amateur, the 22-year-old has some respected golf insiders believing he has all the tools to make that successful transition to the next level.

One of them is Canadian men’s national team head coach, Derek Ingram.

“He’s does all the right things and he’s just been super steady out there,” said Ingram. “He’s got a fantastic combination of length and accuracy off the tee; along with a fantastic putter.

“Corey’s improved in small incremental amounts in every area of his game over the years and if he continues to put in the work, I just think he’s just going to have a tremendous career as a professional golfer,” Ingram added.

Besides praise from Ingram, the recent Kent State graduate is also spoken about highly by his former head coach at the university, Herb Page.

Having won the 2013 and 2014 Gopher Invitational, the 2014 General Hackler Championship, the 2014 Mid-American Conference Golf Championship and the 2014 Jones Cup, combined with a semi-finals appearance at the 2013 U.S. Men’s Amateur, Page says Conners has been nothing short of a superstar on the Kent State team.

He also points to Conners’ steady progression and hard work as an indication of a bright future ahead for the amateur standout.

“He came in to Kent State as a really good junior player from Ontario and he’s leaving as one of the top amateurs in the world,” said the long time Kent State head coach. “And I see no reason why he shouldn’t continue to make that progression.

“Corey’s a very bright young man off and on the golf course and very determined; he’s got all the skills and all the tools to reach his goals on the golf course.” Page added about the talented young Canadian who stands at six feet even.

For his part, Conners says both programs have played a vital role in his maturity and development as a golfer.

“Being part of Team Canada and the Kent State golfing program has obviously been instrumental to helping me to become a better player,” he acknowledged.

“At Kent State, we had a great team there and it was great to play in a lot of competitive collegiate tournaments,” noted Conners.

“It was an awesome experience. I learned a lot about how to manage things on and off the course; and definitely grew as a person,” he added about his four years at Kent State which saw him graduate with a major in actuary math.

The 22-year-old was also quick to recognize the important benefits of his four years spent as a member of the Canadian national team program.

“Being on Team Canada is a big honour; the resources that we have available to us are second to none,” he pointed out. “Derek (Ingram) and all the staff are really great in helping us to get a good plan together and being properly prepared before we compete.”

Grateful for the strong support and encouragement from Kent State and Golf Canada, Conners has plans to make the complete transition from amateur to pro after the World Amateur Golf Championships in September.

Conners had the chance to taste what life would be like as a member of the PGA Tour when he competed at the RBC Canadian Open in Montreal. It was an experience that left the talented young golfer hungry for more.

“It’s definitely fun playing in front of the big crowds; definitely a motivating and exciting experience for me,” he noted.

“I was disappointed that I didn’t play a little better,” admitted Conners, who posted a five over par in the first two rounds and failed to make the cut. “But still this was an awesome experience for me.”

Despite the disappointment of missing the cut, the amateur standout says the entire experience from competing against the world’s best at the Royal Montreal Golf Club has given him extra clarity on where he envisions himself within the next few years.

“Competing at this stage made me realize that this is definitely where I want to be,” said Conners. “So I’m going to keep working hard and try to earn a place out here on the PGA tour.”