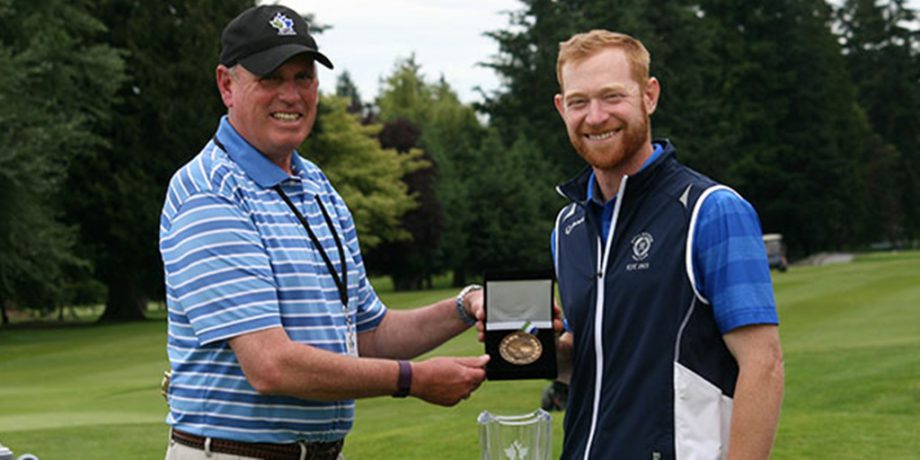 On the women’s side, Shelly Stouffer of Nanoose Bay captured both the Ladies Mid-Amateur & Mid-Master honours after overtaking round 1 & 2 leader Alison Murdoch of Victoria.

In the end, Kevin Carrigan won by six shots, but it was more of a struggle than you might think. Carrigan, who had a nine-shot lead to start Thursday’s final round of the B.C. Men’s Mid-Amateur Championship, saw his huge cushion slipping away after a disastrous beginning to his back nine.

“It didn’t feel like I was going to win by six after I had made three consecutive bogeys and splashed one into the water,” the 29-year-old Victoria native said. “I was thinking that the wheels had fallen off and I didn’t know where they had gone.”

After bogeys on the 10th, 11th and 12th holes, Carrigan then doubled the par 3 13th at Nanaimo Golf Club. Fortunately, he was able to birdie the par 5 14th hole to steady things and he parred the final four holes to post a five-over 77 that left him at four-under for the 54-hole tournament.

“It’s the first time I have won a tournament when I haven’t played three solid rounds of golf. I guess the fact there wasn’t anybody close after two rounds, I maybe got complacent or something like that.

I came out of the gate and bogeyed three of the first four holes and I’m thinking ‘oh my gosh, here we go.’ It’s one of those games. I always tell the juniors I work with no matter how bad it gets, it can always get worse, so just bear down and try to finish your round. I was fortunately able to do that not playing my best golf.”

The B.C. Mid-Amateur, which is open to competitors 25 and older, was held at the same time as the Mid-Master Championship, which is for players 40 and over. Bismeyer, a 54-year-old retired Vancouver police officer, took the Mid-Master title after closing the tournament with a solid round of one-under 71.

Bismeyer finished one shot ahead of Victoria’s Craig Doell and Nanaimo’s Sandy Harper in the Mid-Master category. Bismeyer and Kral will join Carrigan on the three-man team that will represent B.C. at the Canadian Mid-Amateur Championship, which goes Aug. 23-26 in Bromont, Que.

Carrigan has now won two B.C. Mid-Amateur titles. He is also a two-time winner of the Canadian Mid-Amateur championship. Carrigan and Doell captured the two-ball championship that was also contested during the event. They finished with a score of 21-under par. That was eight shots better than the teams of Harper and Shelly Stouffer and John Gallacher and Gudmund Lindbjerg.

Shelly Stouffer battled more than just her closest pursuers in Thursday’s final round of the B.C. Women’s Mid-Amateur Championship. She also battled the butterflies, which were in full flight as she walked the final few holes at Nanaimo Golf Club.

Stouffer, a Nanoose Bay resident, overcame her nerves and held off Alison Murdoch of Victoria and Christina Proteau of Port Alberni to win the Mid-Amateur title by two shots. “I am pretty happy,” Stouffer said. “I was able to hang in and win coming down the stretch. I was nervous, man.”

Thursday’s final round was something of a roller-coaster ride for Stouffer, who shot a final round of four-over 76 to finish the 54-hole event at 16-over par. That was two shots better than the 66-year-old Murdoch, who closed with an 80. Murdoch, a Victoria Golf Club member, had begun the day with a two-shot lead on Stouffer.

“I was just trying to hit every shot the best I could and it was a much better ball-striking day certainly than the first day, but I just put myself in some awkward spots that I couldn’t get out of,” Murdoch said.

Stouffer also claimed the Mid-Master title for players 40 and over. So she won two provincial championships in one day. Not a bad day at the office. “I’ve never won the Mid-Am before so it’s exciting. In a major tournament like this I have never beat Christina before, so it’s a good feeling.”

Last summer, when the Mid-Amateur and Mid-Master events were contested separately, Stouffer won her first Mid-Master title and finished runner-up to Proteau at the Mid-Amateur. Proteau, the pre-tournament favourite, simply could not buy a putt on Thursday, or most of the tournament for that matter.

She finished alone in third place, three shots behind Stouffer. “I hit a lot of good shots at one point and then I didn’t really pull the trigger the last couple of holes,” Proteau said. “It just happens, I guess.”