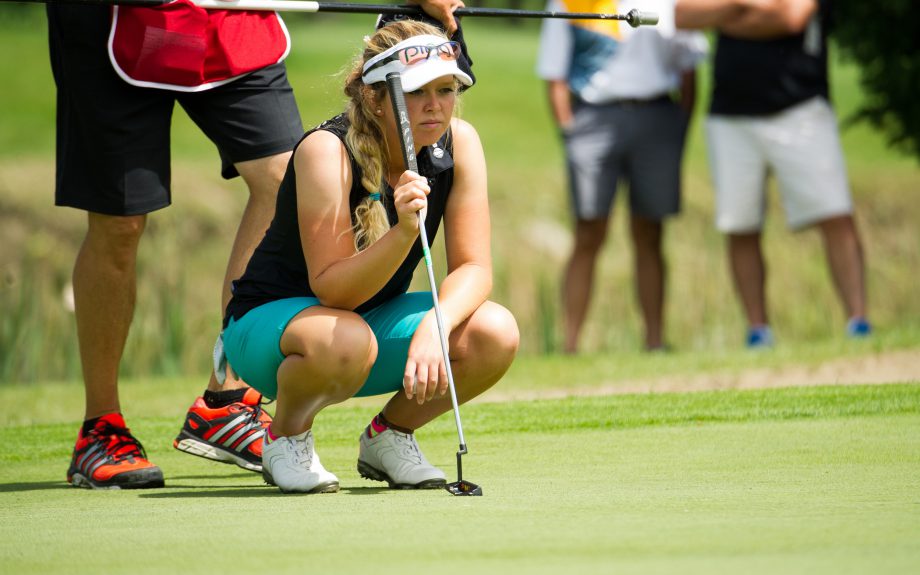 Perhaps the most famous quote about sisters is attributed to Pulitzer Prize winning poet Louise Glück. She writes, “of two sisters one is always the watcher, one the dancer.”

The bonds of sisterhood are incredibly strong for Brittany and Brooke Henderson, but who is the watcher, and who is the dancer?

With Brooke being granted LPGA Tour status after her victory in August, it might be easy to conclude that she is the dancer. Brittany, the elder Henderson by six years, is the watcher.

But without Brittany’s love for golf, there would be no Brooke. “Watching my older sister play, I wanted to be just like her,” explains Brooke. “It drove me to be a better person and a better golfer.”

Brittany – a bubbly blonde whose name precedes Brooke’s on the sign posted in their hometown of Smiths Falls – was the first of the Henderson sisters to pick up a club and play at the 9-hole Rideau Lakes Golf Club, inspiring Brooke to play too.

She was the dancer. Brooke was the watcher.

“My dad was always out there playing, and I would be hanging out with my mom and would be jealous of my dad. I wanted to go hang out with him,” Brittany explains.

Brittany says her father, Dave, had a rule for his daughter, who was nine at the time. He would hit from the back tee and Brittany would tee off from the forward tee, and only when Brittany’s first two shots could reach his drive could she play with him regularly. It didn’t take long for Brittany to achieve that goal, and more. She says she grew up playing a lot of Canadian Junior Golf Association and American Junior Golf Association tournaments, and Brooke was coming along for the ride with their parents.

“We started playing while we were pretty young, just for fun. She would be tagging right along and hit the odd shot with my Dad and I,” says Brittany. “As soon as she could play, well, she wanted to get out there and play.” Through high school, Brittany took golf quite seriously. She eventually went to Costal Carolina – a mid-sized U.S. school near Myrtle Beach (and Dustin Johnson’s alma matter) – on a golf scholarship. “Everything Brittany did, she took it very seriously,” says her coach at Costal Carolina, Katie Quinney. “She put everything she had into golf and school.”

Individually, she was named the conference’s Golfer of the Year and Scholar-Athlete of the Year in 2013, when she helped lead her school to the Big South Conference Championship. “She was a bit of a golf geek,” Quinney explains, laughing. “On a Sunday when everyone else would be on the beach or shopping, she’d just want to go hit balls. It’s what she loved.”

Upon graduation, she turned professional. The following year she captured her first – and to date, her only – professional victory. It was a win on the Sun Coast Ladies Tour in Florida, worth $5,000 US. She had Brooke on her bag as her caddie that week. But after Brooke turned professional in December 2014, it was Brittany who would be her caddie on weeks when she was off from her schedule on the Symetra Tour – where she earned over $15,000 through 12 events.

Although the Women’s British Open conflicted with a Symetra Tour event, Brittany explains it was her own choice to go there and caddie for Brooke, who ended up finishing T61. “It was totally my decision. I just thought it would be really neat to go,” she says. “It was a tough decision, especially on the Symetra Tour because you’re always trying to make money and get through that top ten at the end of the year.”

Even though Brittany has sacrificed a few opportunities to earn money on the Symetra Tour by caddying or playing in LPGA events – she played in Portland, when Brooke won, and played in the CP Canadian Women’s Open – she was still committed to finishing the Symetra Tour season. Quinney, who still keeps in touch with Brittany, is doing her best to encourage her along the way. “I keep reminding her to stay patient and remember being a professional golfer is a process,” she states. “It’s hard to watch Brooke’s process – it’s so accelerated – but (Brittany) is still ahead of the curve of so many people who have graduated with her.”

When Brittany does caddie for Brooke, she says their on-course relationship is a fun one. She admits they share inside jokes where, “a lot of people wouldn’t know what we’re talking about.” And, she’s always happy to be by the side of her best friend. “It’s definitely pretty fun out there. It’s business first, but we try to lighten up in certain circumstances as well,” she explains.

So while Brooke’s future is secured after her victory in August, the question remains for Brittany – will she be watching, or dancing?

“I love playing and I really love caddying as well,” she states. “I guess either way it goes, I’ll be happy.”