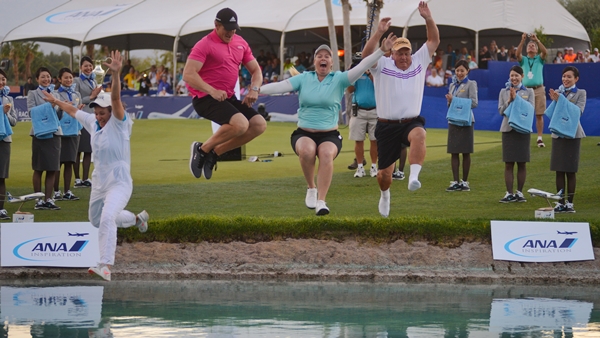 RANCHO MIRAGE, Calif. – Long-hitting Brittany Lincicome outlasted Stacy Lewis with finesse after powering her way into a playoff Sunday in the ANA Inspiration.

When caddie Missy Pederson suggested Lincicome go for the green on the par-5 18th in two in a playoff, Bam Bam decided to play it safe.

“She wanted me to hit 3-wood into the green one of the times and I was like, `No, my wedges are good. We’re just going to lay it up and let the wedges do all the work,'” Lincicome said.

After hitting a 5-iron 190 yards on the final hole of regulation to set up a 10-foot eagle putt that ended up forcing overtime, Lincicome laid up on all three extra holes in more difficult wind conditions. She made three pars, with the last one enough to finish off Lewis.

Instead of hitting a ball into the water, Lincicome found herself splashing around in Poppie’s Pond after her second surprise victory leap in the major championship.

Playing a group ahead of Lewis, Lincicome – too nervous to look at leaderboards – didn’t know where she stood when she played the 18th in regulation.

“I thought I was so far out of the tournament that I never had a chance,” Lincicome said.

She got an accidental glimpse at the leaderboard before she putted.

“I was trying not to look,” Lincicome said. “So, I knew I needed to make it, and my caddie just said, `You have one goal and that is to get it to the hole.’ And I did.”

In 2009 at Mission Hills, Lincicome hit a hybrid from 210 yards to 4 feet to set up a winning eagle in a one-stroke victory over Cristie Kerr and Kristy McPherson.

“You land it on the front, it takes that little slope, and I don’t think my ball knows anything else other than that to do,” Lincicome said. “It’s done it twice now.”

Lewis, the 2011 winner, had three chances to win on the 18th. She missed birdie putts from 13 feet in regulation, 15 feet on the first extra hole and 12 feet on the second.

“The initial reaction is disappointed, obviously,” Lewis said. “But I played great and I hit some really good putts there, especially at the end. … I just played solid all day, so I have to remind myself of that and not get too frustrated. It just wasn’t quite meant to be today.”

On the third extra hole, Lewis left her 103-yard approach from a sand-filled divot short of the green and her chip stopped 12 feet in front of the pin. Her par putt came up an inch short, and Lincicome finished it off – missing a 10-footer and holing out from 1 1/2 feet.

Lincicome finished with a 69. The 29-year-old Florida player, a six-time winner on the LPGA Tour, is projected to jump from 18th to sixth in the world. She last won the Canadian Women’s Open in 2011.

Lewis closed with a 70 in the tricky wind.

“Couldn’t figure out which direction it was going,” Lewis said. “It changed when we were on 18, multiple times during the playoff. The wind was all over the place.”

Lincicome lost a playoff to Inbee Park last year in the LPGA Championship.

“I just took from that that it was nice to be in contention again,” Lincicome said. “Just didn’t let it get to me.”

Two strokes ahead of playing partner Sei Young Kim and four ahead of Lincicome with five holes left, Lewis missed a chance for her third major title. She has 11 LPGA Tour victories and 18 runner-up finishes, three in seven starts this year.

Morgan Pressel was third at 8 under. Her approach on 18 hit the hole and stayed out, leaving her a short birdie putt for a 70.

“I can’t believe it basically hit the hole,” Pressel said. “So close.”

Kim, three strokes ahead of Lewis entering the round, had a 75 to tie for fourth at 7 under with Carlota Ciganda (68) and Anna Nordqvist (69).

“Very disappointed,” Kim said through a translator. “It was just very difficult to figure out things, especially with the wind factoring in. … It really confused me a lot.”