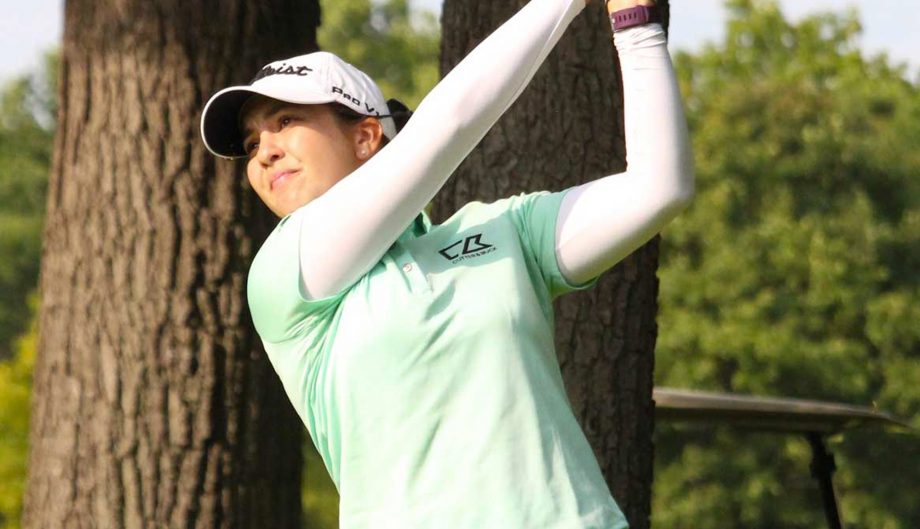 MILWAUKEE, Wisconsin – Brittany Marchand (Orangeville, Ontario) made nine birdies and posted the lowest round of her career to vault into the 36-hole lead at the PHC Classic on Saturday at Brown Deer Park. Marchand turned in an 8-under, 64 to get to 9-under, 135. She has a two-stroke lead over Krista Puisite (Riga, Latvia), Laura Wearn (Charlotte, N.C.) and Rachel Rohanna (Waynesburg, Pa.).

The 64 is a tournament record for the PHC Classic, which started in 2015.

Marchand took full advantage of ideal scoring conditions. After cool and windy conditions on Friday, players were greeted with warm and calm weather on Saturday. There were a total of 28 rounds in the 60’s on Saturday.

There will be 70 players competing on Sunday as the cut was made at 1-over, 145.

Marchand, 25, started on the back nine with a string of three birdies in a row on holes 11, 12 and 13. She also made birdie on 15 and then made her lone bogey of the day on hole 17. Marchand made five birdies on her inward nine including finishing with birdies on holes six, eight and nine.

“I don’t really have many words for the round, it was one of those experiences that just happens and you don’t force it,” explained Marchand. “I told my caddy that I wanted to make some putts today and they just started dropping. I didn’t force anything and it turned out great.”

Marchand, who turned in a 1-under, 71 on Friday, said the early start gave her confidence for the rest of the round.

“I was making better contact today and I started to feel more comfortable with my swing,” said Marchand. “I wasn’t doubting anything, everything was just happening. I built a lot of confidence on the front.”

Marchand will sleep on the lead for the first time in her career on the Symetra Tour.

“I take it as a challenge,” said the former N.C. State golfer. “I want to be in these positions to gain experience and try and come out on top. I want to do my same routine tonight and tomorrow morning and act like it is any other day. I think it is possible, I know I can play well.”

Marchand said she would lean on the experience at the Manulife LPGA Classic when she went into the final-round in the top 10 and had the pressure of playing in her home country on a sponsors exemption.

A win would serve two purposes. The $15,000 first-place payout would move her from 41st on the Volvik Race for the Card money list to likely inside the top 20. A victory would also send her to The Evian Championship, the fifth major on the LPGA schedule.

“Being able to play in the Evian would obviously be a great experience,” said Marchand. “I have a sponsors exemption into the Canadian Open at the end of August so getting another opportunity the next week would be awesome. Anytime I can play up there (LPGA) is great because that is the goal. To go to France would be great too because I have never been there.”

Marchand has four career top 10 finishes on the Symetra Tour including one this season. Her best result is a third place finish at the 2016 Garden City Charity Classic in Kansas.

Marchand and Puisite will play in the final group on Sunday starting at 1:10 p.m.

DORI CARTER EYES EVIAN AFTER WHIRLWIND WEEK: Dori Carter (Valdosta, Georgia) flew to
Scotland last week to compete in the Aberdeen Asset Management Ladies Scottish Open. She made the cut and then flew back to the U.S. to compete in the PHC Classic and arrived in Milwaukee on Monday night.

“A week ago I woke up in Scotland and I’m here now playing in Milwaukee so I’ve had a crazy last two weeks,” explained Carter, who has made 117 career starts on the LPGA. “I was a little jet-lagged and
never quite adjusted to what we had over in Scotland. It was a last minute trip, but I had fun.”

Carter is playing the PHC Classic to try and qualify for The Evian Championship.

“It’s a major on the LPGA so it’s a huge deal,” said Carter. “It would be a big confidence boost to help me finish the year strong.”

Carter plans on being in full attack mode with quite a few stokes to make up Sunday.

“Honestly, being in attack mode is not a bad way to play regardless of the situation,” said Carter. “I don’t have anything to lose, I’m here to win a golf tournament and I’m also here to maintain the
competitiveness.”

“I just made a bunch of long putts,” said Beth Adams. “I saw one go in and it continued from there. It was definitely a different feeling.”

Her longest putt of the day was a 60-footer on hole five.

“I just proved to myself that I know I can post low scores,” said Beth Adams, who has two top 10 finishes this season. “I hope the putts continue to fall on Sunday.”

FRENCH NATIVE STILL IN HUNT AFTER 25-FOOTER ON 18: French native Marion Ricordeau (Laon, France) didn’t have the putter going like she did on Friday when she turned in a 6-under, 66, but she
ended her round with a 25-footer on nine to post a 1-over, 73. She is four shots off the lead at 5-under through 36.

“Finally, I made one,” said Ricordeau, who was in good spirits after the round. “I was just hoping I could make one today as I had only three birdies and they were all in close range. The hole seemed to be very big yesterday and very tiny today. I’m just glad the last one dropped. I just didn’t have the pace today.”

“I hope I’m not too far back to play for the spots in Evian and even for the win,” said Ricordeau. “I just want to do my normal routine and hopefully I get more rest.”

Ricordeau is a tie for sixth.

She is in a tie for second into the final-round.

“I started rough with a bogey on the first hole, but I brought it back with a 2-putt birdie on my 9th hole (the 18th),” said Rohanna. “Overall, I’m hitting the ball really well and putting great.”

Rohanna is hoping for a win or second place finish to qualify for The Evian Championship.

“It would be my first time to France and it would be my second major championship in two years so it would be really exciting,” said Rohanna. “To have LPGA status and give myself a shot to play Evian and move up the money list would be big. I just have to keep it going and keep smiling.”