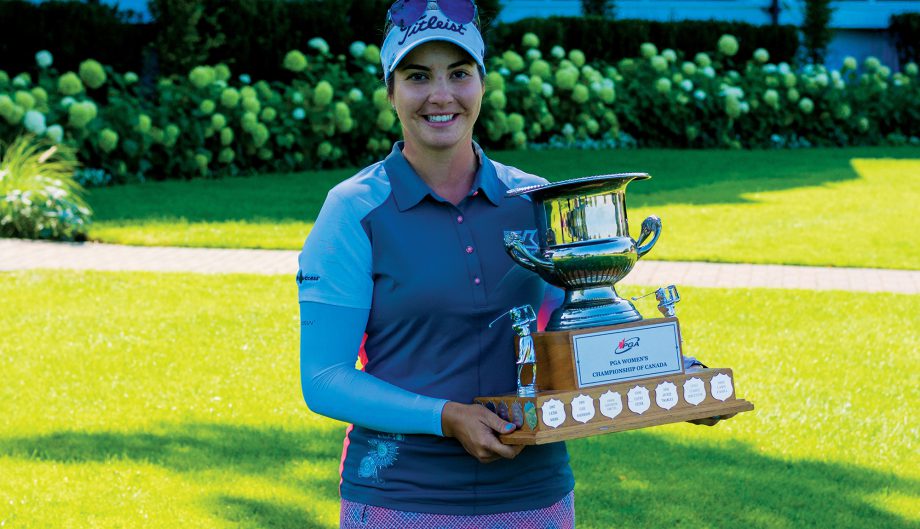 As if it were scripted, two best friends were part of a three-person playoff Wednesday afternoon at Scarboro Golf & Country Club to decide the winner of the 2017 DATA PGA Women’s Championship of Canada.

In the end, it was Brittany Marchand of Mono, Ont., outlasting her old pal Augusta James of Bath, Ont., rolling in a 25-foot birdie putt on the third playoff hole.

“For me, I was glad to be in a playoff with my best friend,” Marchand admitted shortly after the win. “If someone was going to beat me, I’d want it to be her.”

Marchand and James grew up playing junior golf together in Ontario; both attended NC State University; were an integral part of Team Canada’s National Team; and are travel mates in their early professional golf career.

“Brittany and I have a pretty special relationship,” James said after the playoff defeat. “We can complete with and against each other and then hop in the car and drive in the next event,” she said, adding, “so we have a balanced friendship and that’s really hard to come by.”

“We play like two-to-three times a week together, we room together, we pretty much do everything together,” Marchand said of the pair.

Marchand, James and Samantha Troyanovich all finished the championship at 5-under-par, leading to the playoff. On the first extra hole, Troyanovich missed a birdie convert from five-feet for the win, allowing Marchand and James to stay alive with a pair of pars. The second playoff hole saw James and Marchand both make par, while Troyanovich made bogey after a three-putt. On the third playoff, Marchand rolled in a 25-foot birdie for the win.

“The putt was actually pretty straight,” Marchand admitted. “It was down hill and I had to do was just get it started.”

With the win, Marchand joins the likes of Lorie Kane, Brooke Henderson, Alena Sharp, Cathy Sherk, Gail Graham and Nancy Harvey as champions of the PGA Women’s Championship of Canada.

“Some of the best Canadian golfers ever have won this championship before and it’s cool to have my name right there along with them too,” Marchand said.

Fellow Canadian Anne-Catherine Tanguay finished fourth at 4-under-par, with American Jenny Lee rounding out the top-five at 3 under.

Marchand’s win at the DATA PGA Women’s Championship of Canada is her second major title of late, winning. the Symetra Tour’s PHC Classic earlier this month.

The 25-year-old will tee it up next week on the LPGA Tour for the CP Canadian Women’s Open and then will back on the Symetra Tour at month’s end looking to continue her journey of earning full-time LPGA Tour playing privileges for 2018. She’ll also play in next months Evian Championship—an LPGA Tour major—in France.

“I’ve got a lot of confidence heading into the next couple weeks, but at the same time I don’t want to think about it too much and put a lot of pressure on myself,” Marchand said.

The next PGA of Canada national championship takes place Sept. 17-20 at Richmond Country Club for the PGA Assistants’ Championship of Canada presented by Callaway Golf.