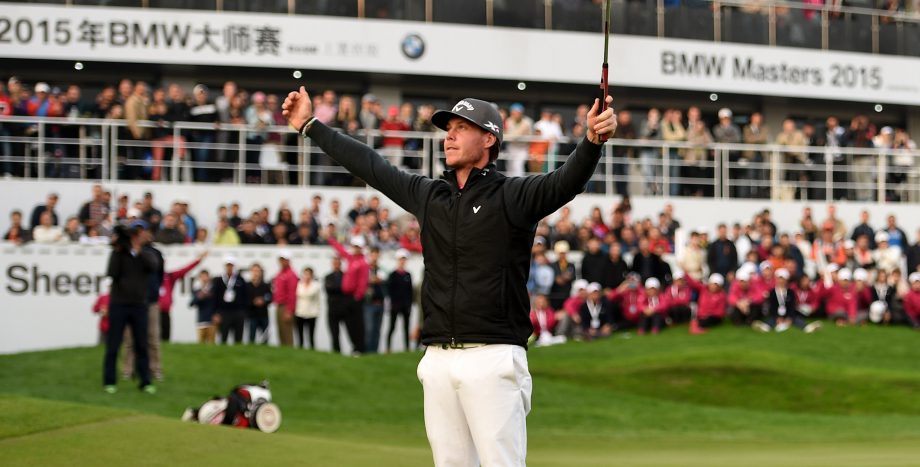 SHANGHAI – Kristoffer Broberg wasn’t happy with his putting last week when he was practicing at home in Sweden, so he made an abrupt change. He looked in his coach’s wife’s bag and decided to give her putter a try.

On Sunday, Broberg made the biggest putt of his career to beat Patrick Reed in a playoff to win the BMW Masters for his first European Tour title.

Broberg and Reed both finished regulation play at 17-under 271 after an afternoon of fine shot-making and dramatic momentum shifts that saw five players briefly share the lead on the back nine. In the playoff, the Swede hit his tee shot straight down the fairway for an easy approach to the pin and a 15-foot birdie putt for victory.

“Last week, in my coach’s studio in Sweden, I was putting indoors and was like I’m not putting good, so I just look in my coach’s wife’s bag,” he said. “So I just tried (her putter) and the stroke was much, much better and the technique, so I just keep it. And it was pretty good.”

Broberg certainly made the putts when it mattered on Sunday, while his rivals came up just short.

Reed surged into a share of the lead with the shot of the day – a stunning eagle from the bunker on the par-5 15th – and then birdied the 16th hole to move one stroke clear of Broberg. But he faltered on his next hole, missing a 4-foot par putt that caught the edge of the hole and curled away.

Two other title contenders, Thailand’s Thongchai Jaidee and South Korea’s An Byeong-hun, also barely missed birdie putts on the 18th green in regulation to get into the playoff.

For Broberg, the victory comes at just the right moment. He’d had three runner-up finishes on the European Tour over the past three years and was starting to doubt whether he’d ever get a breakthrough win.

Now he not only has a maiden title, he’s captured one of the four big-money tournaments in the European Tour’s Final Series and beaten some of the biggest names on the tour to do it, including Reed, Justin Rose, Sergio Garcia and Henrik Stenson.

“I didn’t trust myself. A few weeks ago, I was just like, ‘I’ll never win here.’ I was just so down,” said the Swede, who shot a 68 on Sunday. “This field is really good, so I’m just happy to beat all of them.”

Reed, meanwhile, was searching for answers after yet another disappointment on the final day of a tournament. The 2014 Cadillac Championship winner has five top-10 finishes in his last seven tournaments, but hasn’t come up with a trophy.

“All you can ask for is to have a chance come down late on Sunday and I’ve put myself in that position quite a bit recently and unfortunately haven’t gotten in the winner’s circle,” said the American, who shot a final-round 67. “It hurts, but at the same time, I know what I’m working on right now is definitely the right thing because I’m moving in the right direction. Just have to close one out.”

Thongchai (71) and An (70) finished in a share of third place with Stenson (68), who had five birdies in six holes on the back nine to move into contention, and Lucas Bjerregaard (70), who let an early two-stroke lead slip away.

Rose (67) and Paul Casey (69) were another stroke back in joint-seventh, while Garcia, who briefly had a share of the lead after holing a 25-foot eagle putt on the par-5 13th hole, slumped to equal-11th after carding a bogey and double bogey on his final two holes.

Play was halted briefly during the final round to observe a moment of silence for the victims of Friday’s terrorist attacks in Paris.

At noon, tournament officials blew the horns on the course, normally used to halt play due to inclement weather, and all the players took off their hats and bowed their heads for a minute of silence. Many also wore black ribbons on their caps.

“You realize there’s so much things more important than golf, for sure,” said France’s Benjamin Hebert, who wore a white hat with the words “Pray for Paris” written on it. “You wake up in the morning and you see that on Internet and TV and it’s just wow, it’s happened already this year, and you just don’t understand.