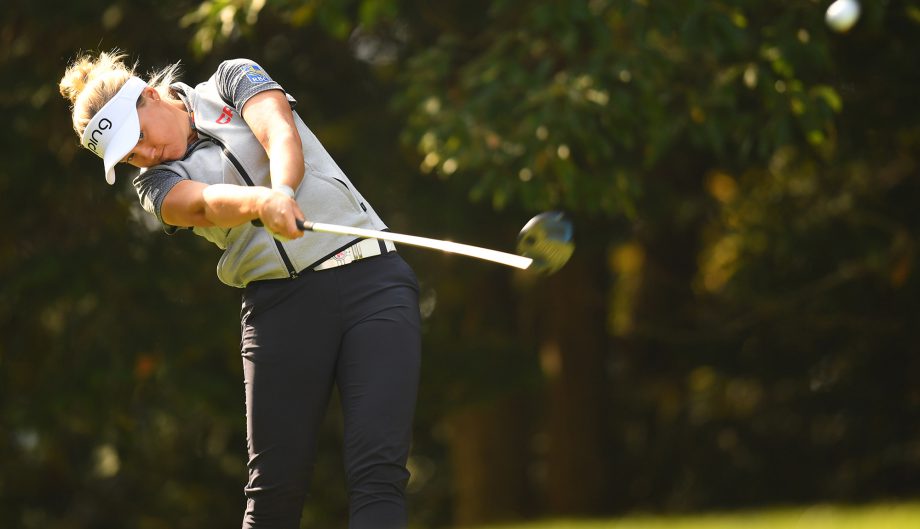 Park made a pair of birdies over the closing stretch at Tiburon Golf Club on Thursday for a 5-under 67, leaving the 24-year-old from South Korea one shot behind after the opening round of the CME Group Tour Championship.

Peiyun Chien of Taiwan and Sarah Jane Smith of Australia opened with bogey-free rounds of 66 to share the lead in a warm breeze.

Park had decent separation from the other four players who only have to win the final LPGA Tour event of the year to capture the CME Race to the Globe and its $1 million bonus. As for the entire 74-player field, it was plenty crowded at the top. That includes Lydia Ko, the first of a record five players who have been No. 1 this year.

Ko, who has gone 34 starts over 16 months on the LPGA Tour since her last victory, drilled a 3-wood onto the green at the par-5 17th and made the 15-foot eagle putt, then holed a bunker shot for par on the final hole for a 67.

Brooke Henderson of Smiths Falls, Ont., had a 70 and Hamilton’s Alena Sharp shot a 75.

Of the top seven players on the leaderboard, Park is the only LPGA Tour winner this season.

“Nothing different from my usual play,” Park said. “I think I started off with a really good feel, a lot of good shots and some good putts. There is a little bit of bounce on the greens, but I think I can play well in the next rounds.”

She dropped two shots by missing the green and coming up short on pitch-and-runs up the slope, though she atoned for those mistakes with seven birdies.

Park had only seen Tiburon on Wednesday during the pro-am. Her peers don’t necessarily see her as a rookie because she dominated on the Korean LPGA Tour the last two years. But she’s new to the LPGA Tour and already has won rookie of the year.

At stake for Park is a chance to become the first rookie since Nancy Lopez in 1978 to win all the major awards.

Most players headed back to their rooms to get dressed for the Rolex Awards dinner on Thursday night, which is more of a preview than a coronation because all the major awards won’t be decided until Sunday.

Lexi Thompson leads the Race to the CME Globe and the Vare Trophy. So Yeon Ryu has a tiny lead for player of the year. Park is leading the money list. Shanshan Feng, who made her debut at No. 1 in the world, is coming off two straight victories and can capture the Globe and player of the year with a victory.

Park was the only one with a presence on the leaderboard.

Thompson began by slamming her driver into the turf as she watched her opening tee shot sail so far right on the par-5 opening hole that it landed in a murky creek in the hazard. She took her penalty drop and let the club fall out of her hands as she pushed the next shot into the hazard. Thompson at least could play that shot, and she eventually holed a 6-foot putt to escape the bogey.

That was the only big damage for Thompson, though some of her best putts were for par and she managed only a 71.

“I bounced back, had a good attitude out there and played some solid golf coming in,” Thompson said.

Feng opened with a birdie and holed a 25-foot birdie putt on her third hole, though her momentum stalled and she had to settle for a 70, along with Brooke Henderson, who at No. 5 in the Race to the CME Globe also can collect the $1 million bonus just by winning.

Ryu had treatment on her right shoulder at the turn and battled for a 72.

Park, with her lanky build and long swing, looked impervious to all the awards on the line this week. And she wasn’t the least bit bothered playing alongside Thompson and Feng. She attacked the course with her driver and managed the wind with her high ball flight.

“They are playing that I played with before, so nothing particularly different today,” she said through a translator.

The surprise might have been Ko, though she has shown signs in recent months of getting her game back. Her biggest concern was the prospect of throwing away her eagle with what looked like a double bogey on the final hole. From a buried lie in the bunker, however, it came out perfectly and rattled into the cup for par and a 67.

“I don’t think I’ve made a par like that before,” Ko said. “I hit it way too hard and it kind of half-plugged in the bunker. I said, ‘Oh, great. What am I going to make?’ Luckily, it was the perfect place to hit for a 4.”