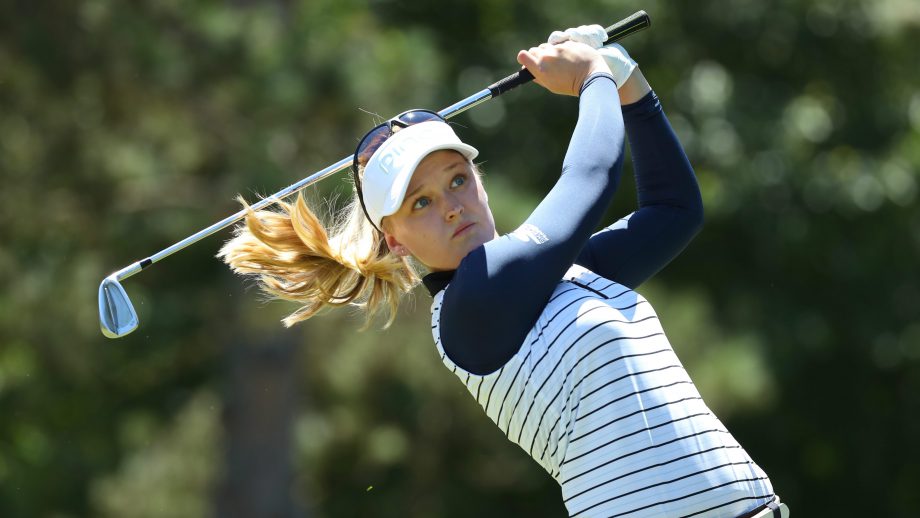 Henderson and Sharp had seven birdies and two bogeys at Midland Country Club.

“We really got it going, kind of fed off each other,” Henderson said. “She hit some good shots, I made some putts and vice versa. So it really worked out nice and it’s a good way to start.”

Paula Creamer and Morgan Pressel were a stroke back.

“We’re best of friends we’ve played a lot of team events together, so it’s nothing new for us to be able to come out here,” Creamer said. “We haven’t played alternate shot for a little while, and when we have played it in the past, it’s always match play and you never have to finish. Out here you actually have to shoot a score, which is a little bit different.”

The teams will play best-ball Thursday, return to alternate shot Friday and close Saturday with a best-ball round.

“It’s intense, but then we got out our tension and then we played and we were free-wheeling it,” Sharp said. “I think the first few holes we didn’t really know what to expect and we had a lot of adrenaline, and then we calmed down and played really nicely together.”

The 21-year-old Henderson won the Meijer LPGA Classic a month ago in Grand Rapids to break the Canadian record for tour victories with nine. Also the Lotte Championship winner in April in Hawaii, Henderson broke a tie with Sandra Post for the Canadian record on the LPGA Tour and also moved ahead of George Knudson and Mike Weir for the overall country mark. The 38-year-old Sharp is winless on the LPGA Tour.

“We chatted pretty much the whole way around,” Lee said. “We usually don’t get to get this opportunity to play with our friends too much, so I think that was the best part.”

The sister duo of Nelly and Jessica Korda topped the group at 68.

“Start of the round, kind of just getting used to everything, the new format,” Nelly Korda said. “Gave each other some good opportunities on the back and took advantage of a couple. Anything under par for alternate shot is good, so we’re happy with that.”

Sisters Ariya and Moriya Jutanugarn shot 70, and Cristie Kerr and Lexi Thompson opened with a 71. Rookies Jennifer Kupcho and Maria Fassi also had a 71. They staged a memorable duel that Kupcho won at the Augusta National Women’s Amateur.

Suzann Pettersen, making her first tour start after a 20-month break for the birth of her first child, and European Solheim Cup captain Catriona Matthew had a 73. Pettersen will be a vice caption for the European team.

“I just really enjoyed it,” Pettersen said. “It was nice to play with Beany. Some good shots and some average shots and some that we just got out of the way. Overall, very happy to be back.”