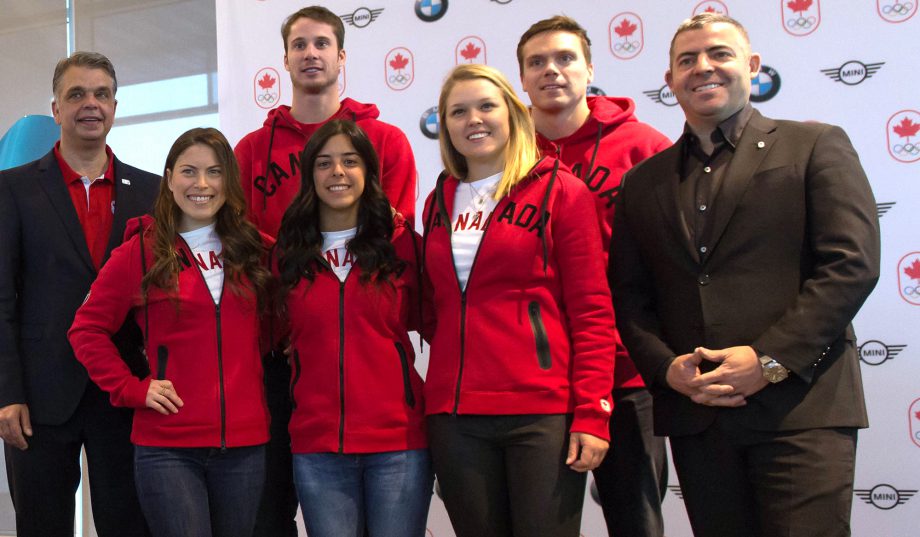 Richmond Hill, Ont. — A new year may be just beginning, but it’s not too early to look forward to the upcoming Olympic Games. The Games begin in August, but BMW Group Canada took advantage of the kick-off to 2016 as a means to introduce Team BMW, a group of six high-performance Canadian athletes aiming to compete at the Rio 2016 Olympic Games.  Support for Team BMW athletes will be on various levels in an extension of the company’s role as National Partner and Official Vehicle of the Canadian Olympic Team.

Passionate about performance and driven to succeed, Team BMW brings the BMW spirit to life.  This group of athletes represents the essence of the BMW Group in human form: efficient performance, innovation, power and grace.  BMW Group Canada is proud to support each of these athletes on their road to success.

BMW Group Canada announced its partnership with the Canadian Olympic Team in January of 2013. As National Partner and Official Vehicle of the Canadian Olympic Team, the company and its retailers have since provided athlete support and generated funds that go towards specialized programs, sports medicine, coaching and travel, among other items. This Olympic year will see those efforts continue, with Team BMW being only the beginning.

“I know I speak for our retailers and associates nationwide when I say how proud I am to help Canadian athletes drive towards their Olympic dreams,” said Kevin Marcotte, Marketing Director, BMW Canada.  “The BMW Group and the Olympic Movement share many common values, which makes our partnership resonate with every one of us. Supporting the Canadian Olympic Team enables us to give back to our community in a unique and fulfilling way by supporting athletes from coast to coast. It is an honour and a pleasure to assist these six athletes in their quest for the podium.”

“BMW has been an outstanding partner of the Canadian Olympic Team and we are honoured to continue our partnership with them,” said Derek Kent, Chief Marketing Officer, Canadian Olympic Committee. “Both of our organizations strive for high-performance and we look forward to seeing Ryan, Meaghan, Roseline, Mark, Derek and Brooke, with BMW’s support, bring this shared value to life on the road to Rio.”

“I’ve appreciated BMW products for quite some time,” said Olympic bronze medallist Mark de Jonge.  “As an engineer, I really appreciate the innovation built into them.  Having BMW as a partner has inspired me to look at my paddle differently and helped me to think differently about how I approach my sport.”

“I’m so happy to have a partner like BMW,” said Roseline Filion, Olympic bronze medallist.  “Sponsorships help fuel the entire athlete.  From food to training to transportation, the support is very much appreciated.  My BMW X3 helps me get to all of my appointments and training and home to visit my parents.  It helps me live the slightly hectic life of an athlete in training a bit more easily.”