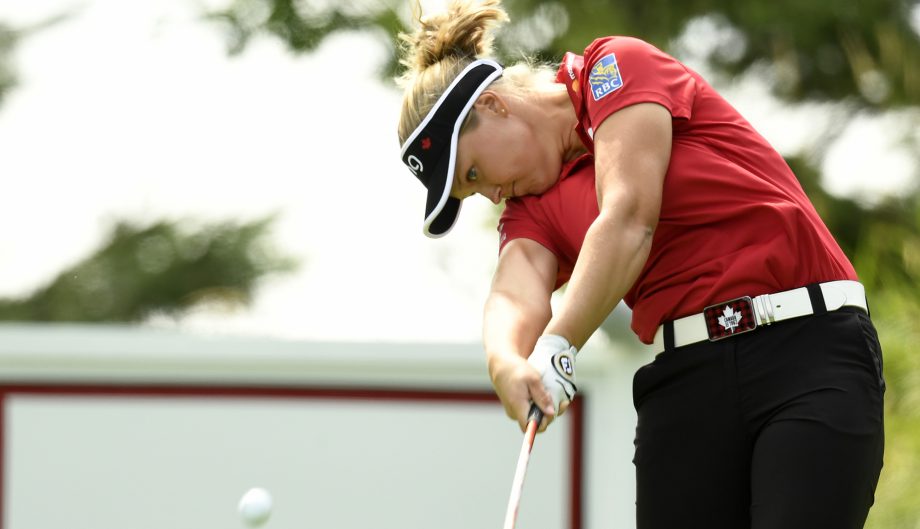 OTTAWA – Brooke Henderson’s sister and caddy Britt asked the gallery to be quiet, no pictures even, as the Canadian golf superstar settled over the ball. She was 25 feet away from an eagle putt that would guarantee she made the cut at the CP Women’s Open. A birdie might work too, with the cutline wavering around 1-over par.

“Nobody was doing anything. They all wanted me to have the best opportunity to make it,” said Brooke Henderson, who grew up in Smiths Falls, Ont., just over 60 kilometres from the Ottawa Hunt andGolf Club.

She struck the ball and the crowd started to cheer, with calls of “come on!” as the ball followed the contours of the green on No. 9. But then it tailed a little and came up less than a foot short. Henderson strode over, looked at her grouping partners to ask if she could finish, then sank the putt to finish the second round at 1 over.

“I was just trying to give myself an easy tap-in to make birdie,” said Henderson. “I didn’t want anymore pressure on myself. I just wanted to nestle it up close. It looked really good. As soon as I hit it I was like that’s going to go in, but a little bit short.”

After Henderson, Cristie Kerr and So Yeon Ryu signed their scorecards, the cutline moved up to 2-over par, guaranteeing the Canadian would play in the third round of Canada’s national women’s golfchampionship.

The 19-year-old phenom admitted after the dramatic final hole on Friday that the pressure of playing in front of what amounts to her hometown crowd was getting to her.

“I feel like I’ve handled it pretty well so far,” said Henderson. “I think now that the cut is kind of over with, I can focus on my game and try to shoot maybe 4- or 5-under these next two and see if I can be in the top 10 or just climb that leaderboard a little bit more.”

Playing in front of the large red-and-white clad crowds didn’t just affect Henderson. She and Brittany Marchand of Orangeville, Ont., were the only players from the field of 14 Canadians to make the cut.

Marchand, who was playing two groupings back of Henderson, often had dozens of fans waiting for her at every hole after Henderson moved on. Although Henderson got the lion’s share of the attention, Marchand actually finished the second round as the low Canadian, tied for 23rd at 2-under par, six shots back of leader In Gee Chun.

“I like playing for the Canadians and playing at home,” said Marchand, who earned a sponsor exemption for the tournament. “Having my family and people turn out. It’s nice when people cheer for you.

“On the Symetra Tour we don’t often have anybody. Maybe your host family, maybe your mom comes. It feels like it really boosts your mood and gives you confidence. Because no matter how well you do, they’re probably going to cheer for you because you’re Canadian.”

Quebec City’s Anne-Catherine Tanguay and Augusta James of Bath, Ont., as well as amateurs Maddie Szeryk of London, Ont., and Calgary’s Jaclyn Lee tied at 7 over.

Maude-Aimee Leblanc of Sherbrooke, Que., was 8 over, Hamilton’s Alena Sharp was 9 over, amateur Grace St-Germain of Ottawa was 10 over and Calgary’s Jennifer Ha was 12.

Hannah Hellyer of Sterling, Ont., was 14 over, Samantha Richdale of Kelowna, B.C., was 15 over and amateur Naomi Ko from Victoria was 16 over. Charlottetown’s Lorie Kane finished the day at 19 over.

Although she does feel like she’s under a microscope, Henderson wants the crowds following her to get even bigger.

“I look around and the whole green is covered, the fairways are covered. Not just covered, they’re like eight people deep, which is truly amazing,” said Henderson. “I just hope they continue to grow over the next two days.”