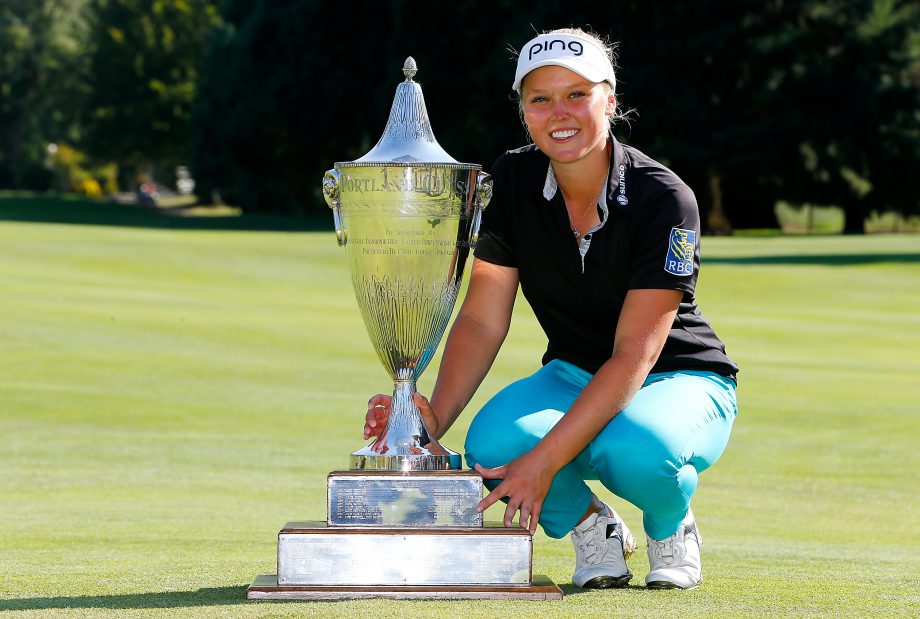 PORTLAND, Ore. – Brooke Henderson got her breakthrough LPGA Tour victory. The Canadian teen will have to wait a little longer to become a tour member.

“I was just trying to keep going low and trying to push it to get even further under par, which I wouldn’t have had that a couple months ago,” Henderson said.

Henderson earned $195,000 and has made $661,818 in 10 events this year. Last year, LPGA Tour Commissioner Mike Whan denied Henderson’s age petition, preventing her from playing Q-school. Because she’s assured of finishing in the top 40 in earnings, Henderson will earn a tour card for 2016.

Henderson said she didn’t know if she would petition the LPGA again this week. “I haven’t even really thought about it yet,” Henderson said. “I’m just going to celebrate tonight and then hopefully make a decision soon and we’ll see what happens.”

Henderson’s eight-stroke margin is the largest in the history of the event and the biggest on the LPGA Tour since Jiyah Shin won the 2012 Women’s British Open by nine shots.

Henderson held a 54-hole lead for the second time this season. This time was different than April in San Francisco, when Henderson ended up finishing third after a 74.

“Today, the first time that I really felt nerves was on 18, and then afterward,” Henderson said. “My attitude is much different than it was a couple months ago, and I think that was a big key. … I demanded a lot more of myself than I did three or four months ago.”

Henderson, from Smiths Falls, Ontario, became the first Canadian winner since Lorie Kane in the 2001 Takefuji Classic. Becoming a part of Canadian golf history is not lost upon Henderson.

“I think Canadian golf is really growing and there’s a lot of great players coming up. To get that for Canadian fans and for the Canadian support that I’ve received over the last couple of months and last couple years is unbelievable, so I’m happy to bring one home for Canada.

“Even the last couple days I received a lot of Twitter messages and text messages and emails, just cheering me on and wishing me the best. I’m sure my phone is blowing up pretty badly right now,” Henderson said.

She joined Laurel Kean as other only Monday qualifiers to win. Kean accomplished the feat in the 2000 Rail Classic.

Henderson bogeyed the final hole, only her third dropped stroke of the week, and had 24 birdies. She got into the field Monday with a 68, then shot 66-67-65 to take a five-stroke lead into the final round. Pornanong Phatlum (68), Ha Na Jang (70) and Candie Kung (70) tied for second.

Henderson never allowed an opening Sunday. She made two-putt birdies at the par-5 fifth and seventh to reach 20 under, and holed a 20-foot birdie putt at the par-4 ninth to take an eight-stroke lead.

Henderson hit her drive in a fairway bunker at 18, but with a large lead, pitched out of the sand, hit her approach to 20 feet and two-putted for bogey. After raising her arms in victory, Henderson was quickly doused with champagne by players and family.

Asked if she was able to taste the champagne, Henderson smiled and said, “No, not really. I can just smell it, though.”

Henderson also won the Symetra Tour’s Four Winds Invitational in June in Indiana, and tied for fifth in the Women’s PGA Championship – the second of the LPGA Tour’s five majors.

Defending champion Austin Ernst shot a 68 to tie for fifth at 12 under.

Morgan Pressel, second after three rounds, had a 75 to tie for 10th at 10 under. Finishing alongside Pressel at 10 under was Canadian Alena Sharp with a round of 1-under 71 on Sunday.