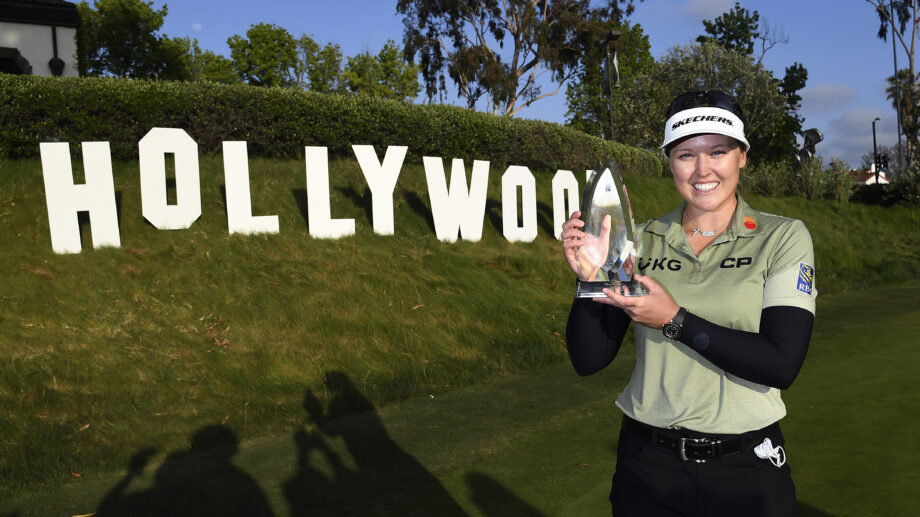 One year ago, almost to the day, Brooke Henderson entered the final round at the DIO Implant LA Open four shots back of the 54-hole lead. The Canadian opened with a 33 on the front nine thanks to three birdies and one bogey and hit her stride at the start of her final nine holes. A birdie on No. 11 gave her the outright lead, with two more carded on 12 and 14. A bogey on 17 cut her lead to two, and with a clutch par on the final hole, Henderson earned her 10th career victory and first since the 2019 Meijer LPGA Classic.

“I just came off a bogey on 17 and I knew 18, it’s a very difficult tee shot, even though it’s just a par 3, you definitely don’t want to be over on the left-hand side where I ended up being,” said Henderson. “I was able to get that up and down in that situation where Jess [Korda, the 54-hole leader] had hit it really tight and looked like she was going to make birdie so I needed to get up and down to avoid a playoff and get the win. So yeah, a lot of nerves, but happy I was able to get job done.”

Wilshire Country Club and the LA Open have embraced Henderson’s win, decking out the tunnel that connects the front and back nines with her image and pictures from her victory, thanks in part to mutual partner Sketchers. Henderson, who leads the Tour in Strokes Gained Total per round with 2.22, likes the challenge of this week’s host course, and is feeling refreshed after having to withdraw last week at the LOTTE Championship due to illness.

“You have to think your whole way around and you have to play smart. Even when you have a good plan, you have to execute the shots,” said Henderson, who ranked T5 in driving distance, T4 in greens in regulation and first in scrambling in Los Angeles last year. “It’s definitely going to challenge all parts of everybody’s game physically and mentally. I think that’s what makes this week fun, just that you know it’s going to be a fight from everybody.”

She’ll play alongside friend and World No. 1 Jin Young Ko, who was also in Henderson’s final grouping last year. The two will also be joined by 2022 LPGA Tour rookie and Epson Tour alum Maddie Szeryk, who replaced Jessica Korda in the field after the American withdrew due to injury on Wednesday. The two Canadians grew up playing on the National Team together, and Henderson said she was excited to be competing in a comfortable setting through the first two rounds.

“Hopefully all of us can hit really good spots and push each other to make a bunch of birdies and hopefully be in contention come the weekend,” said Henderson.