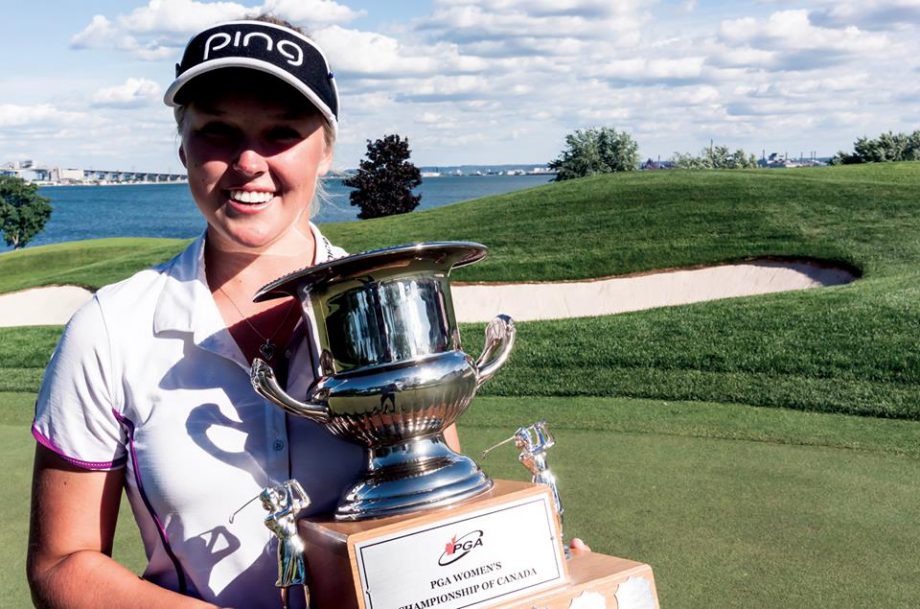 “Last year when I won it was really special because I was still an amateur, but this year I wanted to win again and host the trophy as a professional,” Henderson said.

The Smiths Falls, Ont., native started the day T2 three shots back of the first round leader Tong, but climbed the leaderboard after a trio of birdies early in her round.

“The front nine was really good because I was making a bunch of birdies,” she said about her outward nine of 3-under-par 32, which vaulted her to the top of the leaderboard into a tie with Tong. “But then on the 13th Elizabeth made birdie and I made bogey, so I was saying to myself ‘uh oh, now it’s really time to get going.’”

Henderson converted birdie on No. 16 before watching Tong make bogey and Chen double-bogey on the 17th.

“Everyday I’m trying to become a better person and a better golfer,” Henderson said about her development as both a professional golfer and as a person. “I think it’s really important to be a nice person, do what’s right and help others when you can. My family has really played a huge role in instilling that in me since I was a little girl.”

The PGA Women’s Championship of Canada counted as the third and final stop on the Canadian Women’s Tour, with points awarded toward the Jocelyne Bourassa Player of the Year at the conclusion of the championship.

Similar to past years, the champion of each Canadian Women’s Tour stop and the PGA Women’s Championship of Canada will receive an exemption into the 2015 Canadian Pacific Women’s Open to be held Aug. 17-23, 2015 at the Vancouver Golf Club in Vancouver. As well, two (2) additional exemptions were awarded to the top competitors, not otherwise exempt into the Canadian Pacific Women’s Open from the 2014 Canadian Women’s Tour Order of Merit.

As well, the top five (previously the top 3) players on the Canadian Women’s Tour season-ending Order of Merit will be awarded direct entry into LPGA Stage-2 Qualifying.

Henderson captured the Jocelyne Bourassa Player of the Year award, with Mielbrecht and Suel-Ki Park earning exemptions into the CP Women’s Open.

The next PGA of Canada national championship takes place Aug. 12-14 at Credit Valley Golf and Country Club in Mississauga, Ont., for the Mr. Lube PGA Seniors’ Championship of Canada presented by Adams Golf.