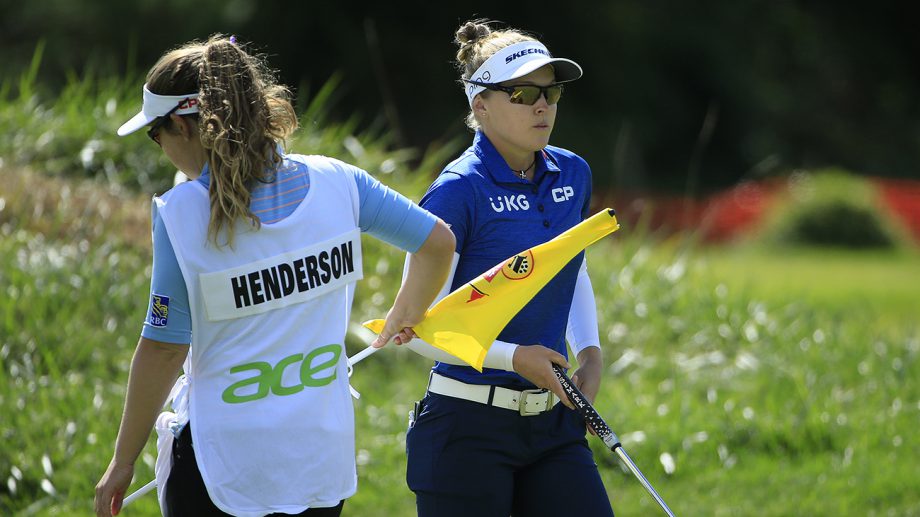 GALLOWAY, N.J. – Mel Reid of England seized control with a run of birdies around the turn and finished strong Sunday for a 4-under 67 and a two-shot victory in the ShopRite LPGA Classic for her first LPGA Tour title.

Reid’s only mistake on the back nine was a bogey on the par-3 17th, which cut her four-shot lead in half when Jennifer Kupcho and Jennifer Song each made birdie.

From the right rough on the par-5 closing hole, Reid lashed a 6-iron knowing that short of the green would be fine with a two-shot lead and the other two players also in the rough. The ball came out hot and ran onto the edge of the green, effectively assuring victory.

In her last start two weeks ago, Reid lost a two-shot lead in the Cambia Portland Classic. When she rapped in her 2-foot birdie putt on Sunday, she dropped her putter and the celebration was on. She was showered with a combination of beer and champagne, eventually grabbed a bottle of bubbly and took a swig.

Brooke Henderson of Smiths Falls, Ont., finished tied for sixth at 11 under while Hamilton’s Alena Sharp tied for 40th at 4 under.

The 33-year-old Reid, who joined the LPGA Tour in 2017, is among the more popular players in women’s golf.

A promising British amateur who played in 2006 Curtis Cup and was low amateur at the 2007 Women’s British Open, her personal life derailed in 2012 when her mother was killed in a car crash near Munich while driving to watch her play a Ladies European Tour event.

She eventually got back on track, and Sunday was the biggest win of her career to go along with six LET titles.

Kupcho, the former NCAA champion at Wake Forest who last year won the inaugural Augusta National Women’s Amateur, lost ground with a double bogey on the par-3 eighth hole and had a shot roll back to her feet on the 16th for a crucial bogey. She closed with two birdies for a 68 to finish alone in second.

Song kept pace with Reid until a two-shot swing on the par-3 11th – Reid made her fourth birdie in the last five holes, while Song made bogey – sent her three shots behind. She closed with a 69 and finished third.

Reid had a few good par saves, looking steady over her 4-foot putts to keep her distance. She finished at 19-under 265, only the second time the ShopRite LPGA Classic was contested over 72 holes.

Nasa Hataoka had a 69 to finish fourth, while Nelly Korda closed with a 66 to finish fifth. Lexi Thompson, the defending champion who has gone nearly 16 months without a victory, shot 68 and tied for 13th.