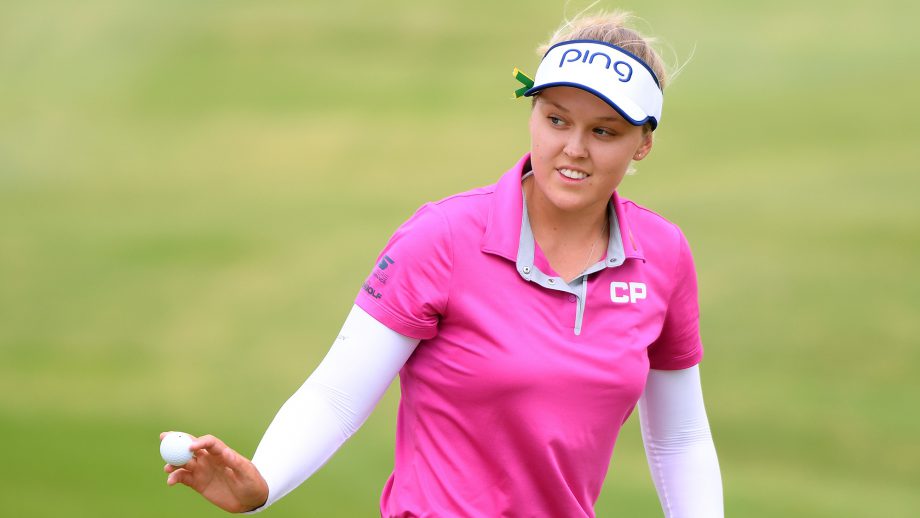 KAPOLEI, Hawaii – Canadian Brooke Henderson kept giving herself chances to run away from the field Friday at the Lotte Championship.

Instead, she had to be satisfied with barely hanging onto the lead.

After two nearly flawless, bogey-free days at windy Ko Olina Golf Club, the 20-year-old from Smiths Falls, Ont., looked all too human in a frustrating third round that saw the wind switch directions.

Then again, so did nearly every other player.

Henderson will take a one-stroke advantage over 2014 Women’s British Open champ Mo Martin, whose eagle on the 13th kept her at even-par for the day, into the final round.

The leader was 3 over on the final three holes, four-putting the 16th for double-bogey. Henderson, who has already won five times on the LPGA Tour, finished with a 1-over 73 left her at 9 under.

She led by five early on the back nine, but 35 putts – she needed just 50 the first two days combined – had her trying to focus on the fact she still led at all.

“I’ve been kind of struggling with my putting all year,” Henderson acknowledged. “The first few rounds I had it going and I felt confident with it; then on the back nine I just kept missing. I just felt like that every single putt and kind of got a little bit down. That’s always a terrible way to be, especially when you’re still leading the tournament.”

“I would’ve liked it to be a lot more, but one shot is good. I know there are still a ton of really talented players really close behind me, so I’ll have to go out and make a lot of birdies and hopefully it’s my day,” added Henderson.

Japan’s Nasa Hataoka, who is a year younger than Henderson, had a 68 to climb into a tie for third with third-ranked Inbee Park, two shots back.

Hataoka won the 2016 Japan Women’s Open Championship, becoming the first amateur – and youngest – to win a Japan LPGA major. Friday, she was one of the few to go low at Ko Olina, putting for eagle three times.

“The wind was totally the opposite. It was really confusing,” said Park, who shot 71. “Some holes I was going into the wind I couldn’t really judge the distances. I don’t think I ever played this wind before on this course in five, six years.”

Even top-ranked Shanshan Feng struggled. Her 74 was only her second over-par round of the year. She shares fifth with Lizette Salas, three back of Henderson. Salas, who lost a playoff at Lotte in 2013, shot 70 despite breaking her driver on the second hole.

“I got a little frustrated for missing a short putt, and then I tossed, quote/unquote, my putter at my bag,” Salas said. “I guess the head landed on the shaft and when I took it out at the next hole, it went (bending noise).”

Daniela Iacobelli and Pernilla Lindberg, fresh off a major victory at the ANA Inspiration, share seventh at 5 under. Qualifier Julieta Granada and second-year player Peiyun Chien, from Taiwan, shot 67 – low round of the day – to join a group of six another shot back.

Jeongeun Lee, a Korean LPGA player here on a sponsor exemption, also shot 67 and is at 4 under. That’s one ahead of Hawaii’s Michelle Wie, whose 69 moved her up 13 spots, to 18th.

After Friday’s frantic finish, who knows how many are in contention Saturday?

“I would’ve liked it (her lead) to be a lot more, but one shot is good,” Henderson said. “I know there are still a ton of really talented players really close behind me, so I’ll have to go out and make a lot of birdies and hopefully it’s my day.”