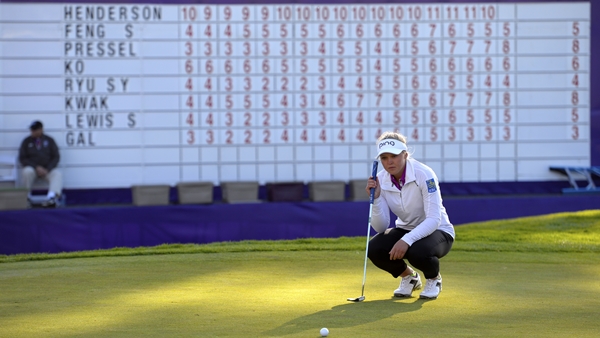 DALY CITY, Calif. – Not old enough to join the LPGA Tour without permission, 17-year-old Brooke Henderson has been good enough for long enough to know about pressure.

She could get her fill of that in the Swinging Skirts LPGA Classic.

Leading by as many as five shots Saturday with Lake Merced at its toughest all week, Henderson closed with a pair of bogeys that reduced the Canadian teen’s margin to one shot over Morgan Pressel and Min Seo Kwak going into the final round.

Henderson had to settle for an even-par 72. She kept the lead, even though she lost some momentum.

And she kept her engaging smile.

“Overall, it was a great day and I’m really happy to be where I am,” Henderson said. “If someone told me at the beginning of the week I would be leading going into the final round, I would have taken it.”

Even so, the final two holes changed the dynamics of this tournament.

Henderson had looked unflappable even in conditions so tough that Pressel (67) and Kwak (69) were the only players to break 70. The wind made the Pacific air feel close to 50 degrees, and overnight rain made the course soft and longer. Pressel hit a 5-wood into the seventh hole Saturday; she had been hitting 9-iron.

Henderson didn’t miss a fairway until the par-5 14th hole, and she converted that into birdie with an up-and-down from a greenside bunker. But she couldn’t escape a pair of mistakes to close out her round, and it didn’t help that her group was on the clock over the final two hours.

From a bad lie in the left rough on the 17th, she worried about going right and down a steep slope and instead went short and left. Then, she didn’t realize until making contact on her pitch that “something really hard” was under the turf. Her club bounced and the ball shot over the green, and only a tough up-and-down from there allowed her to get away with no more than a bogey.

On the par-5 18th, she thought her third shot was good until she didn’t hear anyone clap. It was long and in the rough, and she couldn’t get up-and-down.

Henderson was at 9-under 207, and suddenly had more contenders than just Pressel and Kwak.

Defending champion Lydia Ko, who turned 18 on Friday and now is chasing someone even younger, salvaged a 71 and was three shots behind. Ko was as many as six shots behind and was happy to be that close to Henderson.

“I saw the leaderboard, and every time it’s there, even though we played a couple tough holes, she wasn’t losing shots. She was gaining shots,” Ko said. “Shows how strong she is in her mental game, too.”

Stacy Lewis and Shanshan Feng of China each had 71 and were four shots behind.

More than just her first LPGA victory is at stake for Henderson. She was denied a waiver to the LPGA Tour’s minimum age requirement of 18 last year. Commissioner Mike Whan has granted only two exceptions to the rule – Ko and Lexi Thompson – mainly because both had already won on the LPGA.

Perhaps a victory by Henderson will change his mind. This is only her second LPGA event since she turned pro in December.

Expectations are high in Canada, a country that loves its golf and hasn’t had an LPGA winner since Lorie Kane in 2001. Henderson is used to that.

The most pressure might be seeing Pressel with her on the first tee Sunday, along with Kwak.

Henderson recalls meeting Pressel, who won the Kraft Nabisco at 18 and remains the LPGA Tour’s youngest major champion, at a golf outing in Ottawa when Henderson was 8. She refers to Pressel as her biggest role model in golf and concedes she still gets a little nervous around her.

Pressel remembers what it was like to be a teen in the spotlight. She was poised to win the U.S. Women’s Open at 17 until Birdie Kim beat her with a bunker shot on the last hole at Cherry Hills, and Pressel came through two years later at Mission Hills. She has been following Henderson’s progress over the years.

“I knew she would be something special out on our tour as well,” Pressel said.