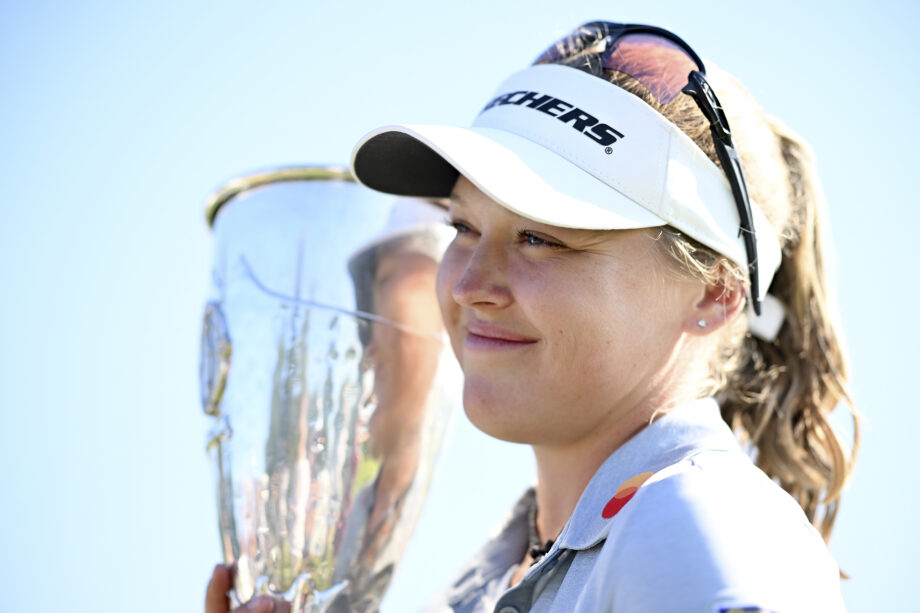 When Smith Falls, Ont., native Brooke Henderson returns to Ottawa for the CP Women’s Open later this summer, she will undoubtedly be greeted with a rock star reception from the hometown crowd.

Having recently won her second career major at the Amundi Evian Championship, Henderson is now the only Canadian golfer to have captured multiple majors – Mike Weir and Sandra Post both have one each to their names.

While the former Canadian National Team Member led throughout the first three rounds at the Amundi Evian Championship, she did run into a bit of turbulence in the fourth round and had to dig deep to secure her second major.

Despite not playing her best golf in the final round, Henderson stayed composed and was clutch when she needed to be.

“Not the start that I wanted, but I stayed pretty patient, as patient as I could under those circumstances,” she said right after winning at the Evian Resort Golf Club in France.

“The saying is that majors are won on the back nine on Sunday, so I just tried to keep that frame of mind, and knew I was still in it if I could have a solid back (nine).”

Heading into the 18th hole, Henderson was tied at 16 under with American Sophia Schubert but she would drain an eight-foot birdie putt on the final hole to secure the victory.

“I made some clutch putts and shots down the stretch, which really helped. I’m just super excited to have my second major championship win; 12 wins on tour is pretty cool, too,” noted the Canadian LPGA superstar. “Really excited for what the rest of the season holds.”

Two other big tournaments on Henderson’s radar include the Women’s British Open in early August and the CP Women’s Open at the Ottawa Hunt Club from Aug. 22-28.

The 24-year-old was home last month for media day and to promote the return of the CP Women’s Open to the nation’s capital. The LPGA superstar spoke about her fond memories from the last time the tournament was held in Ottawa.

“In 2017, when I showed up on Thursday morning, my tee time, I think, was 8 o’clock and I was thinking there’s going to be a couple of people watching. But when I showed up to the first tee there was lines of people on both sides – it was just a phenomenal experience,” said Henderson, who is an honorary member at the Ottawa Hunt and Golf Club.

“Many will know this story, but Brooke had to make a birdie on her 18th hole in order to make the cut. And what does Brooke do? She makes birdie,” Applebaum recalled.

“She goes out the next day and shoots 63 – a course record. It was a spectacular 24 hours and it was amongst one of most amazing things I’ve ever seen. We have been continually amazed by this athlete over last few years.”

A year later, at the 2018 CP Women’s Open in Regina, Henderson became the first Canadian in 45 years to win Canada’s national open.

The tournament was cancelled in 2020 and 2021 due to the COVID-19 pandemic but will make its long-awaited return to Canada this year at the Ottawa Hunt and Golf Club.

Tournament Director Ryan Paul speaks about the excitement building around the return of the LPGA’s best this year.

“Golf fans in this community have gotten behind our National Women’s Open Championship in a major way,” he said. “We can’t wait to get back to Ottawa Hunt and put on a can’t miss summer celebration.”

Henderson will be joined by fellow Canadians Maude-Aimee Leblanc, Maddie Szeryk, Alena Sharp, Jaclyn Lee, Rebecca Lee-Bentham, Selena Costabile, Monet Chun, and Lorie Kane—who earlier announced this year will be her last. A number of other Canadians are expected to receive exemptions into the star-studded 156-player field in the coming weeks.

One of the new additions for 2022 is the rink which will be situated on the par-3 17th hole. Having also played hockey as a goaltender growing up, Henderson is eager to test out the hockey themed hole later this summer.

“I was super excited when Golf Canada mentioned that they were going to bring The Rink over to the LPGA Tour. I think the fans are going to be so wild and fired up. It will be super exciting and I’m really excited to seeing what it looks like,” she said during media day in June.

Now with 12 LPGA victories and two majors to her name, the 24-year-old Canadian is arguably – at present – the most successful Canadian athlete across all the major sports.

And she is eager to continue that success on home soil later this summer.

“My sixth major on the LPGA Tour is always this one. This is a huge week for me, for us, and I always want to play my best,” said Henderson about the CP Women’s Open.

Given all the success, there’s definitely and buzz and excitement surrounding her homecoming at the end of August. And the 24-year-old from Smiths Falls is eager to bring her ‘A’ game for the pumped up and energetic Canadian golf fans later this summer.