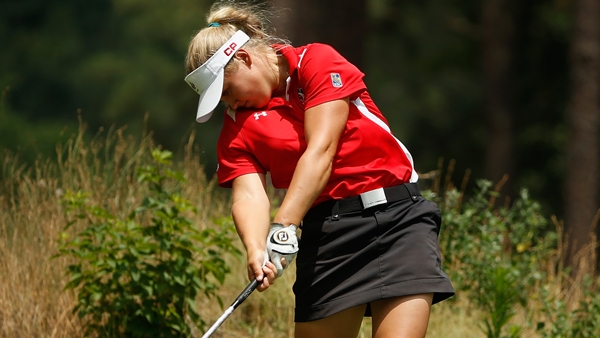 Brooke Henderson did not disappoint in her opening round at the PGA Women’s Championship of Canada, presented by Nike Golf, firing a dazzling 7-under-par 65.

The 16-year-old’s first round included seven birdies and a hole-in-one on No. 17, en route to a new course record at the Thomas McBroom designed FireRock Golf Club in Komoka, Ont.

“My caddie told me it was over the back and I kind of panicked for a few minutes,” Henderson joked. “But when I went up there I checked and there it was-it was a great shot.”

Earlier this summer Henderson, who is currently ranked No. 2 in the World Amateur Golf Rankings, earned low amateur honours (T10) at the U.S. Women’s Open, finished tied for 26th at the Kraft Nabisco Championship, and tied for 45th at the Manulife Financial LPGA Classic. The Team Canada member’s year has also included wins at the Canadian Women’s Tour event in Niagara Falls, the Porter Cup, the Ontario Women’s Amateur and the Scott Robertson.

“I’ve had a great summer and it’s definitely been a huge confidence booster,” Henderson said. “I’m looking forward to the future and want to use these experiences on the LPGA Tour when I finally get out there some day.”

In total, 12 players are at even par or better.

The PGA Women’s Championship of Canada was first played in 1987 and past champions include Cathy Sherk, Gail Graham, Nancy Harvey, Lorie Kane and Jessica Shepley.

The PGA Women’s Championship of Canada counts as the third and final stop on the Canadian Women’s Tour with points awarded toward the Jocelyne Bourassa Player of the Year at the conclusion of the championship.