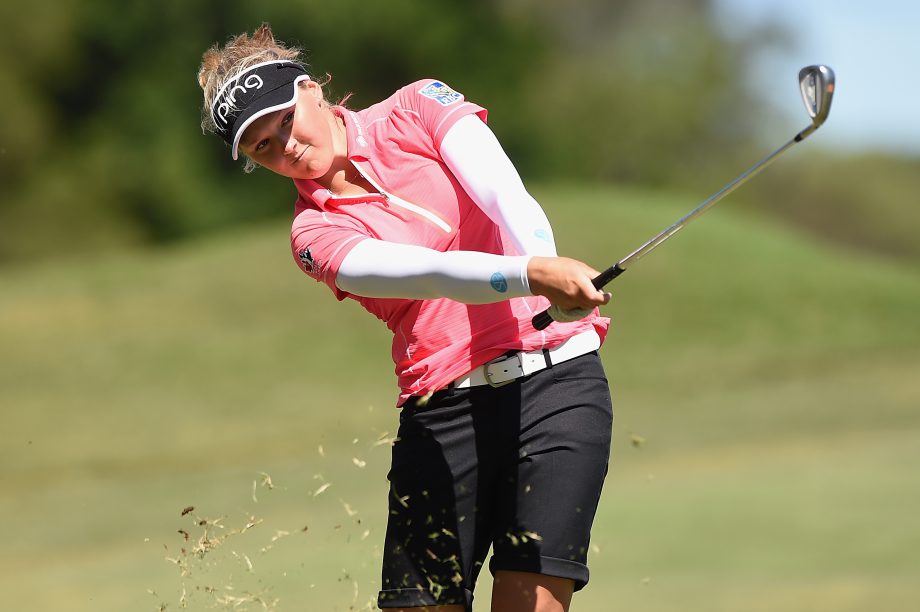 PORTLAND, Ore. – Brooke Henderson has come a long way since her win last year in Portland.

Back then she didn’t even have LPGA Tour status. She was a Monday qualifier for the Portland Classic, urged to try for a spot in the field by her older sister.

She went on to become just the second Monday qualifier to win an LPGA event, and she did it in decisive fashion, winning by eight strokes.

“It’s definitely been an incredible 18 months, turning pro at 17 and then didn’t have status on the LPGA tour, and was trying to play my way into events and just trying to see what would happen,” Henderson said. “I really took the best advantage of the opportunities I was given and I won here last year, which really changed my whole career.”

The Canadian teenager has since climbed her way up the rankings, reaching No. 2. She’s third on the money list this year. And she’s got a major championship – she won the Women’s PGA Championship two weeks ago by defeating top-ranked Lydia Ko in a playoff.

Ko opted out of playing in Portland.

With her Portland win last year, Henderson became the third-youngest champion in LPGA Tour history at 17 years, 11 months, and six days. She was the first Canadian to win on the tour since Lorie Kane in 2001.

“It was definitely a huge stepping stone for me,” Henderson said. “Right afterward I did try to soak it all in. Then I moved right into the Canadian Open, where it was a huge celebration all over Canada with Canadian fans and that was really cool. It definitely was a huge accomplishment here and I hope that maybe this year I’ll win by nine.”

SKIPPING PORTLAND: Thirty-seven of the top 50 players are skipping the Portland stop. Many players are opting to take this week off ahead of the U.S. Women’s Open next week in California. Normally the Portland tournament is popular among the women, but it was moved up in the schedule this year because the LPGA is taking three weeks off for the Olympics. For the past 11 years the event has been held in August.

RIO BOUND: The field for the Portland Classic includes 20 players from 16 different nations who are set to play in the Rio Olympics this summer. Henderson will represent her native Canada, and Stacy Lewis is set to play for the United States.

But South Africa’s Lee-Anne Pace announced Wednesday that she is withdrawing from the Olympics over concern about the Zika virus.

“I hope that everyone can understand that this was a very difficult decision to come to, however my health and my future family’s health must come first,” said Pace, who is ranked 38th in the world.

Several PGA players have pulled out of the Olympics citing concern about the Zika virus (including Australian Jason Day and Ireland’s Shane Lowry this week), but none of their LPGA counterparts had until Pace.

YOUTH IS SERVED: Mariel Galdiano earned a spot in the Portland Classic in the Monday qualifier. The 18-year-old, about to start her freshman year at UCLA, said the fact that Henderson won as a Monday qualifier is not lost on her. In fact, the average age of tour winners this year is just over 21.

“(It) definitely shows how young the game is getting and how close we are as junior golfers, how close our dreams are and how good we can become,” she said.

Galdiano comes from Hawaii where she went to the prestigious Punahou School, which boasts famous alumni including Michelle Wie and President Barack Obama.

THE DETAILS: The Portland Classic is the longest-running non-major on the LPGA Tour, now in its 45th year. The 72-hole event at Columbia Edgewater Country Club starts Thursday and runs through Sunday, with a cut to 70 after the first 36 holes. This year’s purse is $1.3 million, with $195,000 going to the winner.