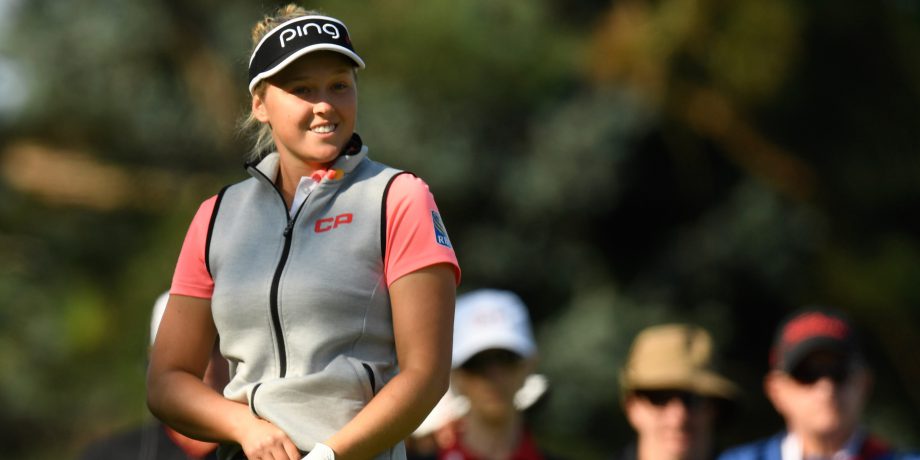 TORONTO – Canadian golfer Brooke Henderson is barely out of her teens and her list of accomplishments on the LPGA Tour is already a long one.

She won her first LPGA Tour event in 2015, added her first major championship last year and picked up two more tournament titles in 2017. Henderson capped her latest impressive season Wednesday by winning the Bobbie Rosenfeld Award as Canada’s female athlete of the year.

“I’ve always kind of felt like I belonged out there, which I think is a big part of why I’ve had so much success so early,” said Henderson, who turned 20 in September.

Henderson picked up 35 of 63 votes (56 per cent) in a poll of broadcasters and sports editors from across the country.

“Not only is the young golfer an international champion, but she’s also playing a monumental role in helping young children get into the game,” said Mitch Bach of CHAT TV news in Medicine Hat, Alta.

Henderson, who also won the Rosenfeld award in 2015, is the first golfer to win the award on two occasions since Lorie Kane (1997, 2000). Swimmer Penny Oleksiak took the honour last year.

“(Henderson) captured the attention of Canadian golf fans in a way not seen since the adoration given previously to Mike Weir,” said Winnipeg Free Press sports editor Steve Lyons.

Henderson had a slow start to the season with just two top-10 finishes in her first 10 events. She found her form in June by winning the Meijer LPGA Classic and just missed out on a playoff at the KPMG Women’s PGA Championship later that month.

Her second title came in September at the New Zealand Women’s Open.

“Patience I think is a key word that basically describes my whole season,” she said.

Henderson, from Smiths Falls, Ont., finished sixth on the money list at just over US$1.5 million and was 13th in the world rankings. She did it by relying on her impressive long game and consistent accuracy from the fairways.

Another big moment for Henderson came in August at the Canadian Pacific Women’s Open in Ottawa. She nearly missed the cut before giving her army of fans something to cheer about on the weekend.

Henderson surged up the leaderboard before finishing in a tie for 12th place.

“I can’t even really put into words what it meant to me to see all that support and those people cheering me on,” Henderson said from Naples, Fla. “To get that 63 course record on Saturday in front of all those people in my hometown was truly amazing and one of the highlights of my year for sure.”

Henderson’s five career LPGA Tour victories leaves her only three behind Sandra Post for most wins by a Canadian.

“She knows how to score and she’s not afraid to go low,” Post said. “Some people, they get to 5 under, and they quit. She keeps going.”

Henderson, who had eight top-10 finishes, plans to focus on improving her short game as she prepares for the season opener next month at the Pure Silk-Bahamas LPGA Classic.

Tennis player Denis Shapovalov won the Lionel Conacher Award as Canada’s male athlete of the year on Tuesday. The CP team of the year will be announced Thursday.

Bobbie Rosenfeld, an Olympic medallist in track and field and a multi-sport athlete, was named Canada’s best female athlete of the half-century in 1950.

“I’m extremely proud to be named Canada’s female athlete of the year,” Henderson said. “I was just looking at some of the names … Marlene Streit, Lorie Kane, Sandra Post, all golfers that have won this award. Even the last few years, I just saw Christine Sinclair, Hayley Wickenheiser, Eugenie Bouchard.

“Those names are huge names in all of sport and all of Canada. So to be amongst them is a great honour for me.”